Ali Larter is joining the Christmas baby mix with the birth of her first child — a healthy baby boy! 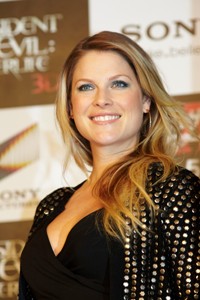 Ali Larter has given birth to her first child. Theodore Hayes MacArthur was born just in time for the hustle and bustle of last minute Christmas shopping.

Larter and her husband, Hayes MacArthur, welcomed their little Christmas miracle into the world on December 20. Theodore Hayes MacArthur was born in Los Angeles and the new mama and papa are over the moon about the new addition to their little family. “He’s our perfect Christmas present,” they gushed over his arrival.

Ali Larter and Hayes MacArthur had a seven-year courtship before they decided to head down the aisle in August of 2009. After announcing her first pregnancy in July of 2010 the actress famously revealed the sex of her baby in the most comedic of ways. During a taping of Late Night with Jimmy Fallon the actress blurted out, “I’ve got a little penis inside of me.” And Jimmy Fallon shot back, “That’s what she said.”

There you have it — baby Theodore will have a pretty cool tape to watch when he grows up. Can’t wait to see if Jimmy Fallon interviews the mother and son duo a few years down the road.

Congratulations go out to Ali Larter and Hayes MacArthur.