Big Love actress Ginnifer Goodwin is known for her small, pixie-like physique. We assumed she was naturally skinny — not so! Goodwin reveals in a new interview that she’s struggled with her weight for most of her life. 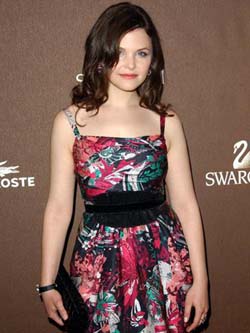 Celebrities struggle with their weight, just like we do. Surprised? Sure — especially because many celebrities act like their svelte figures are a gift from God.

Not so, says He’s Just Not That Into You actress Ginnifer Goodwin. She told Health magazine that she’s struggled with her weight since childhood.

“I have been a member of Weight Watchers for 23 years,” the 32-year-old actress explained in Health’s January-February issue. “It’s the only thing on the planet that doesn’t dehydrate you or just make you miserable. I’ve never had a dramatic weight problem, it’s just that I tend to indulge, and then I need to get back on track so I can button my pants.”

Goodwin went on to explain that her southern upbringing had an influence on her views toward food.

“I really did go through a period when I was very little when I remember realizing that vegetables did not come out of the ground deep-fried,” she said. “I changed my eating habits in fourth grade because I was a heavy little girl, and I was unhappy. And I remember my mom making dinner for me the first night that I was on this new program, and I burst out crying because the vegetables were green, and I thought she was trying to starve me to death.”

Now, Goodwin strives to maintain a healthy weight without caving to the pressures of Hollywood’s ultra-thin expectations.

“I can be indulgent for six month[s] and put on some weight, but I still never actually get to the point of being unhappy and self-destructive,” she said. “And working with my amazing stylist, I’m really good at hiding things, so I’m always pretty confident. Except when I’m in a bathing suit. It doesn’t matter what my body looks like, I hate putting on bathing suits in front of other people.”

We’re loving her healthy take on weight loss and health. Can you relate to Goodwin’s Weight Watchers allegiance?