Rooney Mara won the coveted role of Lisbeth Salander in the upcoming film, The Girl with the Dragon Tattoo. Whether or not you’ve read it, we know you’ve heard of it — but do you know Rooney Mara? We introduce you to Mara herself and let you know why we’re so excited to see her in the role. 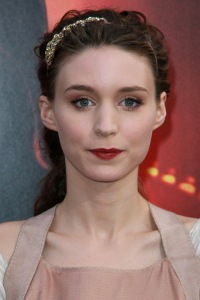 People seem to fall into two categories these days — those who have read Steig Larsson’s The Girl with the Dragon Tattoo and those who haven’t.

The second group of people have definitely heard it’s going to be a film. If you aren’t familiar, here is the deal. Salander is a brilliant computer hacker with a seriously troubled past. She helps investigative journalist Mikael Blomkvist [Daniel Craig] solve a decades-long murder mystery.

Quite a number of prominent actresses were after the role, including Natalie Portman, who tried to buy the rights to the books, Carey Mulligan from this year’s Never Let Me Go, Juno‘s Ellen Page and Scarlett Johansson. Actress Noomi Rapace garnered serious praise for her work in the Swedish version of the film and two sequels, The Girl Who Played With Fire and The Girl Who Kicked the Hornet’s Nest.

Rooney Mara won the coveted role, but many people weren’t familiar with her work. Well, not until the tour de force performance she delivered as Facebook founder Mark Zuckerberg’s [Jesse Eisenberg] girlfriend in the very first scene of director David Fincher’s The Social Network this year.

Fincher was so impressed with her work that he cast her as Lisbeth. Mara, who is the sister of Brokeback Mountain‘s Kate Mara, also starred in last year’s remake of A Nightmare on Elm Street. After seeing shots of her from the upcoming film with chopped hair and piercings, we’re confident she looks the part.

But can she handle the role in The Girl with the Dragon Tattoo?

We’ve loved her in everything she’s done so far, and Fincher certainly knows what he’s doing in the casting department — we’ve stopped counting his award nominations for The Social Network.

Lisbeth has a lot going on under her icy exterior and Mara certainly pulls that off in interviews. She’s quiet and reserved…until she throws out a zinger and surprises you with her wit. Will she be able to erase the memory of what Rapace has done and wow us with her work? Who knows? But boy, oh boy, we can’t wait to find out.

The Girl with the Dragon Tattoo is scheduled to hit theaters on December 21, 2011.