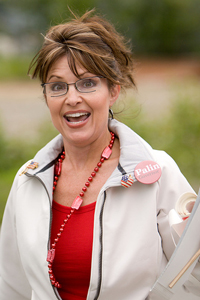 Sarah Palin took a shot at first lady Michelle Obama’s efforts to improve nutrition and decrease obesity in our schools.

During Palin’s reality show, Sarah Palin’s Alaska, the former Alaska governor makes s’mores and remarks that the treat is “in honor of Michelle Obama, who said the other day we should not have dessert.”

This is reportedly not the first time that Palin has dissed Michelle’s campaign to prevent kids from eating fattening foods. She told talk radio host Laura Ingraham that “the first lady cannot trust parents to make decisions for their own children, for their own families in what we should eat.”

She also delivered cookies to a school in Pennsylvania and said in her speech: “Who should be deciding what I eat? Should it be government or should it be parents? It should be the parents.”

Michelle Obama’s “Let’s Move” program encourages parents to educate their kids on the importance of diet and exercise and promotes healthy alternatives to desserts. Statistics have shown that one in three American children are overweight.

Whose side are you on? Team Palin or Team Obama?

read on for More Sarah Palin