Troubled Disney star Demi Lovato takes yet another hit after racy photos are posted on Twitter. 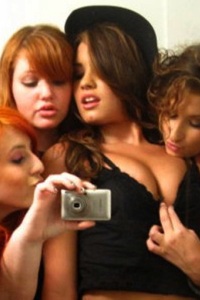 Demi Lovato is still in a treatment center getting help for her ongoing “emotional and physical issues” after losing it while on tour with the Jonas Brothers, but the drama just keeps coming. In the wake of news that the backup dancer she attacked, Alex Welch, is threatening to press charges, sexy photos of Lovato have hit the net.

The shots, which were released over two days, are of the Sonny with a Chance star posing in front of a mirror with her dancers, flashing her cleavage and licking one of her gal pals. There is also a photo booth style strip of Demi posing seductively in her bra.

Word is these shots were leaked on Twitter, but folks are muttering about who they actually came from, with some pointing the finger at Welch, who is in the group shots.

With this newest bout of bad press, Lovato joins the ranks of Disney princesses who’ve had their sexy pix go viral. The Lovato shots landed just a few weeks after racy shots of Mickey Mouse Club alum Christina Aguilera, while Vanessa Hudgens had racy photos hit the net twice, in 2007 and 2009.

Disney drama queen Miley Cyrus was also involved in a sexy scandal recently when a naked iPhone photo popped up. The original story was that the photo was leaked after her purse was stolen, but now, word is, the naked young woman in the photo was an imposter!

As with Cyrus’ other big news this month (aka her bong video drama), however, a key thing to remember here is that Lovato is 18. If Lovato were not a Disney princess, would the shots even make news? Some argue that the issue isn’t her age, however, but instead her Disney audience. Lovato may be legal, but the kids tuning in to watch her show are young and impressionable.

Either way, with her eye on recovering, getting back on her feet and back into the Disney fold, this photo leak is the last thing Demi Lovato needed!