Brad Womack didn’t please viewers or his girlfriends when he dumped DeAnna Pappas and Jenni Croft in The Bachelor season 11 finale. Now, he’s back in the game and the ladies can expect payback. Not only will Pappas and Croft return for some closure, but before Womack finds love, they can also look forward to a few defenders in the new pool of ladies on this season of The Bachelor.

“There’s a large group out there that’s like, ‘Screw this guy. I hope he falls on his face and gets what’s coming to him,’ and he does,” host Chris Harrison promised TVGuide.com in a recent interview. Womack also, however, has already revealed that in spite of this, he scores on this round of The Bachelor! “I did find love, and I’m very happy to say that,” Womack revealed last week. “I’m very much in love. I’m a happy guy.” 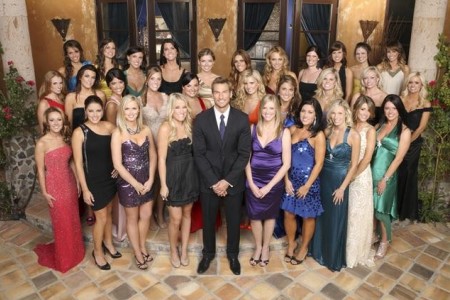 To find that love, Brad Womack must survive another season of Bachelor drama, but during Harrison’s big preview interview with TVGuide.com, he previewed that the “old school” and “sexy” upcoming season relies on traditional Bachelor drama, instead of big scale scandals like a contestant dating a producer or having a significant other back at home.

“The funny thing is there’s a lot of drama and my guess is Brad doesn’t know or hasn’t seen about 95 percent of it,” Harrison said. “It’s definitely one of those seasons where he’s not privy to a lot of it and I think he’s going to be shocked by what’s going on behind the scenes or over at the girls’ house.”

While Womack tries to find love and redemption at the same time, the contestants in his dating pool have their own back-stories to overcome.

“What we have this year instead of scandals are unbelievably compelling, tragic stories that you will absolutely be captivated by,” Harrison said. “It’s a different group than we’re used to, a little more mature in their life experiences.”

Word is sweet, Southern contestant Emily is sure to be a fan fave and has quite a back-story, while looker Michelle “Money” is the instigator in the new batch of ladies looking for roses, but it sounds like Womack may not see past Money’s leopard print entrance. Meow!

While we all know Womack found love, Harrison teased, “You’ll have to wait and see if it’s a ‘happy ending’ with a proposal, but he is in love. For him, it’s a win, because he wanted to prove to himself, as much as anybody, that he can get there.”

The Bachelor debuts Monday, January 3 at 8 p.m. on ABC.