The winner of Survivor: Nicaragua is 21-year-old Jud Birza, also known as Fabio. 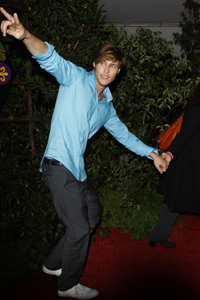 “It’s awesome,” Fabio said of winning the huge prize. “I think I stood on a stool, then kissed people, but everybody was really happy, and it made me feel really good.”

“Fabio is a great guy, so he’s very deserving of a million dollars,” said Sash. “I thought, coming in, I knew every strategy known to man, but Fabio played in a way I’ve never seen before. So, I give him a lot of credit for that.”

Chase, who came in third in Survivor, may not have won the million, but he did get his country song, Buzz Back, played on the air. “That was really cool to play for however many millions of people are out there. I’ve never done that before,” he said.

Fabio won more than money — he also won something else he has been after. Fame. “Once you’re famous, people want to talk to you,” he tells People. “I want to get in the mix, dude. I don’t want be like, ‘Oh, [expletive], I’m famous now.’ I want to be like, ‘Oh, dude, I’m famous now! Let’s party!'” I think we know how he is going to blow that million dollars!

read on for more Survivor: Nicaragua