Betty White keeps her memorable 2010 going with the Associated Press’ Entertainer of the Year honor. 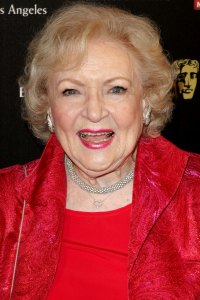 Betty White fought a good fight against young Hollywood to be named the Associated Press’ Entertainer of the Year.

Betty White, 88, is having quite the year after hosting Saturday Night Live and nabbing a Best Actress SAG nomination for her show Hot in Cleveland. The Associated Press’ Entertainer of the Year title makes it all the more special. “It’s ridiculous,” Betty White gushed. “They haven’t caught on to me, and I hope they never do.”

After White’s appearance in a 2010 Snickers Super Bowl commercial, an estimated 500,000 fans raced to Facebook to campaign for White to host Saturday Night Live. The veteran actress turned down the hosting gig three times before but knew 2010 was her time. “I thought I was so Californian and it’s so New York-oriented that I would be like a fish out of water. This time, my agent said, ‘No, you’ve got to do it.’ …But I was scared to death.”

Betty White also managed to land herself guest starring roles on the hit shows Community and The Middle, while starring in her own TV Land show Hot in Cleveland. But the bulk of her 2010 work shouldn’t be confused with a comeback, as the former Golden Girls star isn’t reappearing after years of being off the map — she’s always been here. “It’s been phenomenal, but everybody keeps congratulating me on my resurgence and my big comeback,” she says. “I haven’t been away, guys. I’ve been working steadily for the last 63 years.”

Congratulations on being named the Associated Press’ Entertainer of the Year, Betty White!