We all know the story of King Arthur, the wizard Merlin and the sorceress Morgana. But, what were they like when they were young? Was Morgana ever…nice? The hit BBC show Merlin tackles that question and did something few shows ever do. They gave her character time to develop. Imagine that! 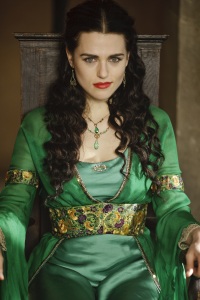 SheKnows got a chance to sit down with Katie McGrath who plays Morgana to talk about season three, which premieres on the SyFy channel on January 7.

McGrath gave us the scoop on her character’s transformation, working with Buffy the Vampire Slayer star Anthony Head and the juicy moments we’re about to see.

The magic of Merlin

SheKnows: One of the things people love about Merlin is that they didn’t make Morgana evil. They’ve given her time to make a transformation. Can you talk a little bit about that?
Katie McGrath: I’m really glad you asked this question because I actually, personally, don’t really believe Morgana is evil. I believe that Morgana has been put in a situation that she has been put in, not through any fault of her own at the start of season three. She took the only option that was available to her. She reached out to Merlin [Colin Morgan] and he didn’t help her. So the first person who comes along and says it’s okay to be who she is, is Morgause [Emilia Fox] so of course she’s going to go running to her. And she’s spent a year with this person who likes her for who she is, and says it’s okay to have magic, finally. So at the end of this year, how could she be anything else other than what it is that she’s become? And she doesn’t believe that she’s evil. She believes that she’s doing the right thing. Perversely she’s exactly the same as Uther [Anthony Head] but in the opposite way. Do you know what I mean? Evil is just a point of view, because she’s been told from one point of view that she’s a bad guy. From the other point of view, she’s the good guy.

SheKnows: We love the scenes between you and Uther. What is it like working with Anthony?

Katie McGrath: You know, after three years it only gets better. But this year that’s been difficult. Obviously there has been a lot of tension…it’s been really hard because I love him so much and he’s really very paternal and so great! And I’m so horrible to him! I feel really bad. [Laughs] You’re on set and you’re switching between laughing and joking and Tony being wonderful, to me being a complete bitch! So there are days where it feels a little schizophrenic. But to be able to have somebody like Tony to work with, who is so talented and such a giving actor, and so genuinely lovely to be around, it makes the whole experience very wonderful. And I’m glad and I’m relieved and so grateful that most of my really heavy scenes are with him, because I know they are going to be, if not enjoyable to do because of what we’re doing, at least very gratifying.

SheKnows: You guys have such great chemistry. I’m curious about who she still has connections with, after being lied to “for her own good,” and all. For instance, Gwen [Angel Coulby]. 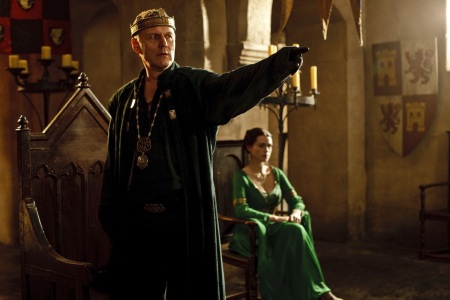 Katie McGrath: I think when Morgana left Camelot at the end of Merlin season two and she spent all that time away, I think in embracing her magical side and embracing the bit that she’s hidden from them, I think by that very nature, she’s had to cut ties with everyone else that she’s had relationships with in Camelot. By choosing to be with Morgause, by choosing to expose what has been hidden, I think that is rejecting everything that she has known before. She can’t be magical and be in Camelot and be Uther’s loving ward while she is hiding who she is, while all the time, Uther is trying to kill her. And I think that goes for Gwen and I think that goes for Arthur [Bradley James] and it definitely goes for Merlin. Merlin tried to kill her, so that relationship is dead [laughs].

SheKnows: Well, there is that!

Katie McGrath: Well, yeah. [Laughs] There is no coming back from that!

SheKnows: Did you do a ton of research on the character? Is there a specific book you love about Morgana?
Katie McGrath: The great thing about Morgana and the great thing about all the books there are out there is that she’s told in so many different ways. She is such a strong and such a powerful and such an important female mythical character that there are hundreds of books. Beyond imagining. And every one of them is wonderful. And the thing about Merlin is that it’s another telling of this wonderful, mythical character. And for research, I tended to stick to the script. This was our telling and this was our interpretation, and rather than reading what everyone else had said, Merlin was trying to say something new and different. So I stuck to the script in regards to our telling. At the same time, I read a lot of them just for fun because I love to read. When it came to sort of trying the character, I looked for different things other than other portrayals of Morgana. I looked for something else to make her individual for Merlin because she is a new telling and she is something unique. And that’s what I liked about her, that she was separate from everyone else. 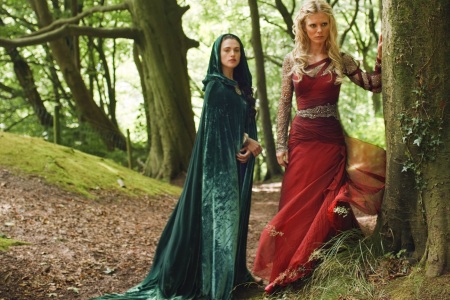 SheKnows: I know you have a big secret this season and I know you can’t reveal it, but are there certain moments that fans should be looking for this season?

Katie McGrath: The Crystal Cave is a very epic episode. It was one of my favorites. I worked with Alice Troughton, the director who really was wonderful, because it was a very difficult episode for me to get the tone right and everything. So that’s pretty fantastic. And then the final episode. That’s the thirteenth. It’s epic. And the twelfth. It’s a two-parter. So look out for twelve and thirteen and The Crystal Cave which I think is episode five.