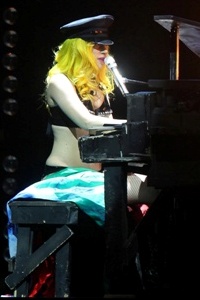 Lady Gaga is bringing her mega-hit theatrical experience to Paris — just a little later than expected. Lady Gaga was scheduled to hit Paris’ Bercy venue December 19 but the concert was canceled due to treacherous weather. The not-so friendly conditions are said to have halted her road vehicles from delivering her road show equipment.

The official website of the venue confirmed the news, saying the Monster Ball stop was canceled because of a “ban barring heavy vehicles over 7.5 tons from hitting the road in dicey conditions.”

Lady Gaga was not too happy and tweeted her sadness to her little monsters in Paris. “All 28 of my trucks for the Monsterball were detained by the French government going on over 26 hrs, two of my employees were arrested trying to get into Paris so we could perform. I am furious and devastated, its unfair to my fans and to me.”

Turns out the singer was okay with “stripping” her show down to the basics but couldn’t manage to convince the powers that be. “I asked if I could do a stripped version of show, but there would be no sound or power source, its all been detained,” she tweeted. “I’m so sorry, angry+sad.”

If there’s anything Lady Gaga hates more than conformity, it’s disappointing her fans. “I love Paris + I love my French fans. I’m sorry little monsters. A photo of storm, I’m stuck on bus,” she tweeted and included a photo.

Have no fear all of you Paris fans waiting to go gaga for Lady Gaga. The theater is confident that the Monday, December 20 show will go off without a hitch. As for the canceled Sunday show, fans will have to wait and see if it gets moved to Tuesday, December 21.

read on for More Lady Gaga