Jay DeMarcus of the popular country group, Rascal Flatts, and his wife Allison are celebrating the birth of their first child — a sweet baby girl. 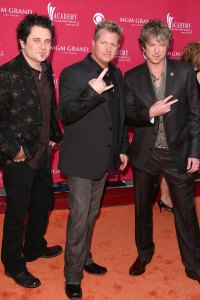 Jay DeMarcus is finally catching up with his daddy-driven Rascal Flatts bandmates with the birth of his first child.

The bassist for the band and wife Allison welcomed baby Madeline Leigh DeMarcus on December 17, just in time to be spoiled for Christmas. “Allison and I are thrilled!” the proud new papa told Access Hollywood. “Madeline is absolutely gorgeous; she looks just like her daddy! Both mom and baby are doing well.”

Of course, any member of Rascal Flatts who becomes a first-time father will look to pro and fellow band member, Gary LeVox, for pointers. “Gary told me to strap in and hold on for the wildest ride of my life,” Jay told People. “I didn’t get much sleep last night. I kept waking up and thinking, ‘Oh my gosh, I’m a father!'”

Jay and Allison DeMarcus have been married since 2004. The couple actually met in a very interesting way. The former Miss Tennessee met her man after appearing in a Rascal Flatts video for their hit song, These Days.

Congrats go out to the happy new parents!