The awards season announcements keep on coming. This week, the Academy of Motion Picture Arts and Sciences released its list of songs eligible for the Best Original Song Oscar. Some names on the list are no surprise such as Alan Menken, the Tangled composer, who is probably running out of room on his mantle for Oscars. But there is one name on there you might not expect: Justin Bieber. Bieber may just be able to add winning an Oscar to his list of things “I’ve done before the age of 20.” 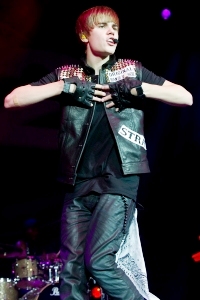 Justin Bieber may win an Oscar. Whether you think that’s wonderful or one of the first signs of the impending apocalypse, it’s certainly news.

This week, the Academy of Motion Picture Arts and Sciences released its list of the 41 songs eligible for a Best Original Song award. The rules for the award state that the song must “consist of words and music, both of which are original and written specifically for the film,” and “a clearly audible, intelligible, substantive rendition of both lyric and melody must be used in the body of the film, or as the first music cue in the end credits.”

It looks like Bieber’s duet with Jaden Smith for The Karate Kid, Never Say Never, fits in those guidelines. Aw, wouldn’t it be cute if they gave them both little teeny tiny Oscars like the ones they gave Walt Disney for Snow White? Just kidding guys!

Bieber and Smith are competing against the likes of Gwyneth Paltrow, who is nominated for two of her songs from Country Strong, Cher and Christina Aguilera‘s offerings from Burlesque, and songs from Toy Story 3 and the Alan Menken-composed Tangled. Looks like they have some stiff competition.

If Bieber does win, he’ll have to add a chapter to his memoir. The 83rd Academy Awards will be broadcast live from the Kodak Theatre in Hollywood on Sunday, February 27.