The Green Hornet, starring Seth Rogen, Jay Chou and Christoph Waltz doesn’t open until January, but SheKnows got an early peek at the film. So, does Rogen’s The Green Hornet do the old TV show justice? Does director Michel Gondry’s unique style make the film a hit or just confuse the situation? Check out our early impressions!

Last night, I was lucky enough to see an early screening of The Green Hornet. My full review is under embargo until closer to the release date, but I’m allowed to give you my impressions. 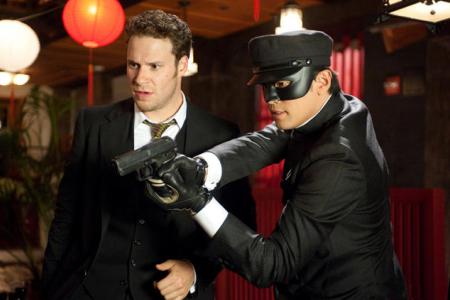 This is one of those films that people seem to have low expectations for. It’s not a big, dark superhero extravaganza like The Dark Knight or Thor. The fanboys aren’t freaking out in anticipation. In fact, the whole thing is a strange combination. TV superhero played by comedian Seth Rogen, Oscar winner Christoph Waltz as the villain, foreign superstar who has yet to break out in the U.S. Jay Chou as Kato, beloved yet eclectic filmmaker Michel Gondry directing…it’s a bit of a hodgepodge.

Anyone can be forgiven for wondering how that was going to turn out. Hodgepodge is a good way to describe it, and yet it doesn’t fail to deliver.

I can’t give away too many details yet, but I’ll say this. Jay Chou is so funny, even without a full command of the language, that he clearly has a big future in the U.S. I met him on the set of the film, and though he needed a translator for most of our interview, he had the entire group of journalists rolling on the floor, laughing.

Christoph Waltz is one of those actors that you’d be happy to watch sleeping. Yeah, I know that sounds creepy, but he’s fascinating even when he’s doing nothing. To get a chance to watch him in a comedy is just glorious. The two of them absolutely sell the film.

On the other hand, Rogen’s character is pretty unlikeable for most of the film. I like him as an actor and he does try to make him a lovable rogue, but he’s just written as a brat. The story is a bit all over the place and Gondry’s signature style doesn’t help that. He does bring a bunch of cool bits, but there were plenty of moments where audience members turned to each other saying, “What the heck was that?” That said, it was a lot of fun.

The Green Hornet never takes itself too seriously and in the end, that makes all the difference. Check back closer to the release date for my full review. Oh, and for you super fans out there, Green Hornet’s connection to the Lone Ranger is never mentioned, but there is a poster on the wall of Britt Reed’s room that you might want to take a look at. The Green Hornet hits theaters on January 11, 2011.