It feels like one big game of six degrees of Jessica Simpson as the engagement plot thickens with the news of Tony Romo’s engagement to Candice Crawford. 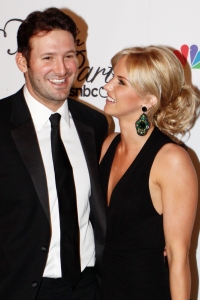 Tony Romo proposed to Candice Crawford at the Five Sixty restaurant in Dallas on December 16 — just in time for the TV anchor and beauty queen’s 24th birthday. The Dallas Morning News is reporting that Tony Romo popped the question in front of Candice Crawford’s family including her actor brother, Chace Crawford.

For those of you not up to speed, Tony Romo, the quarterback for the Dallas Cowboys, is the ex of newly engaged Jessica Simpson, who happens to be the ex of also freshly engaged, Nick Lachey. Jessica Simpson and Eric Johnson announced their wedding news just a week after Nick Lachey and Vanessa Minnillo became engaged back in November.

Even though Tony Romo broke up with her in July of 2009, Jessica Simpson assured David Letterman she was moving on and doing fine during an interview earlier this year. “Tony is great — still a friend of mine,” she said. “I still look at his cute butt in the outfit — uniform.”

Honestly, these three connected couples are handling each other’s good fortune very maturely and it’s refreshing to see there are no claws or scratching coming to the surface. We think it’s safe to say, all of them deserve a happy 2011.