Shelley Malil, an actor who appeared in the hit comedy The 40-Year-Old Virgin, was sentenced to life in prison for stabbing his ex-girlfriend more than 20 times — and now his victim is speaking out.

Shelley Malil was sentenced to life in prison after a jury found him guilty of attempted premeditated murder and assault with a deadly weapon in the 2008 attack. Malil stabbed Kendra Beebe over 20 times in her neck, chest, back and arms after finding her with another man — and now she’s speaking out against the man who almost took her life. 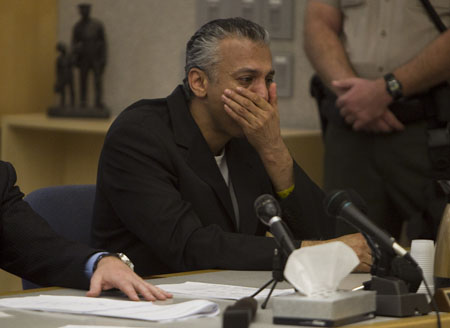 Malil said he stabbed Beebe after finding her drinking wine with another man in her San Diego apartment. He had gone there to apologize for stealing things from her home and emailing sexually explicit photos of her to her coworkers.

In her victim statement, Beebe said Malil is a crappy actor and everything he said in court is a lie.

“During the course of the trial it became clear he was an actor, but not a very good actor at that. His testimony was lie after lie after lie,” she said.

“Despite the stab wounds he inflicted, I am alive.”

Malil seemed apologetic while begging for mercy from the judge.

“I want to do whatever I need to do to make sure I make right from the wrong that I did,” he said.

“Kendra Beebe did not deserve anything that happened to her… I can’t even begin to imagine what she has been through.”

Despite his life sentence, Malil is eligible for parole in 12 years and could get out in as little as nine, accounting for time served.