In 1982, the film Tron arrived and in many ways was too ahead of its time. Audiences and movie marketers did not know what to do with this new computer world that was in its infancy in real life. Now, almost three decades later, Disney has brought back the franchise with a sequel that is one of the most highly anticipated movies of the winter — Tron: Legacy.

Jeff Bridges is still the star, but much of the draw of Tron: Legacy has got to be the eye-popping special effects in 3D. Visually, it is stunning. Rarely has 3D been used so effectively in a film in 2010. With that said, the average moviegoer has to wonder: Does Tron: Legacy have much more? 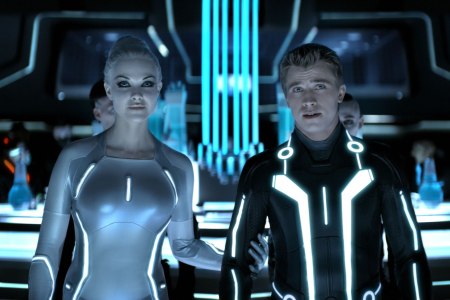 In many ways, yes, Tron: Legacy is a triumph. Between the eye candy and the ear candy recorded by Daft Punk who provides the soundtrack, the movie is a treat for the senses. But, when it comes to story, Tron is a little lacking. There are holes throughout the film that made us wonder when the film concluded where we had actually been. But, overall, Tron: Legacy is a good piece of filmmaking that perhaps goes on a little long.

Tron, at its core, is the story of a man who saw the future as humans “living” inside a computer. The first film took Bridges’ Kevin Flynn character and sent him on an adventure into the deep regions of the tech world. At the time, it was one of the first films to use computer generated animation and much of the audience failed to connect. But, as generations passed, the film became a cult smash. Many filmmakers working today, including those behind the new Tron, admit that the film had an enormous effect on their lives.

In Tron: Legacy, Flynn’s son Sam [played by Garrett Hedlund] is a lost twenty-something who has lived for two decades without his father who has either disappeared or died. Suddenly, he gets a page from a beeper that belongs to his father. The call emitted from the Flynn family arcade. Sam heads down to the arcade and after some digging around, he finds himself thrown into the Tron world that engulfed his father. After a few action sequences, he is reunited with his father. The scenes between Bridges and Hedlund are magic as the two make a perfect father-son pair. 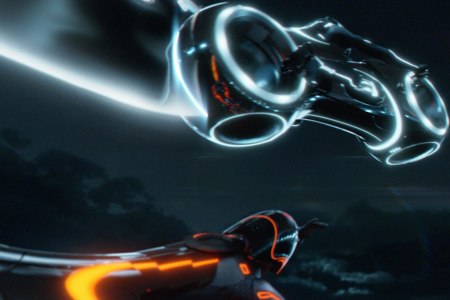 This wouldn’t be a Tron movie without special effects that blow the mind and in Tron: Legacy, the wildest effect of all is the use of a twenty-something Jeff Bridges, who plays Clue [a spin-off of Kevin Flynn] who is ruling the computer world with an iron fist. For the last few decades, Kevin Flynn has laid low, figuring passiveness was the best way to combat a tyrant. It is when his son arrives and the family is reunited, that he sees that pacifism will get him nowhere.

As we said, Tron: Legacy runs a little too long. The story is marred in complications that may leave some scratching their heads upon its conclusion. But, this is not a film audiences attend hoping for Oscar-caliber screenwriting. This is a visual film of the highest order and must be seen on the big screen in 3D to fully appreciate the movie-making magic.

Overall, Tron: Legacy is like cotton candy, delicious while you’re enjoying it, and then a quick blip on the memory hard drive in hindsight.