Larry King is signing off after 25 years. Whether you love him for his unique interview style or you watch him for gaffes like asking Jerry Seinfeld if his hit NBC show had been canceled, don’t miss tonight’s Larry King Live because it will be television history. 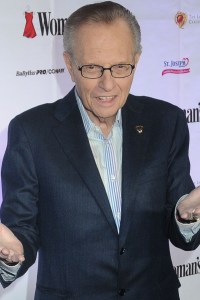 King, who is now 77, will be welcoming some high profile guests and delivering a final goodbye. In his words, he will be hanging up his nightly suspenders. King was one of the first major stars of cable news and his show predated FOX News and MSNBC.

In the quarter decade his show has been on the air, he’s interviewed politicians, business leaders, actors and notorious newsmakers from every walk of life. Presidential campaigns were announced, Middle East leaders met on the same set…King even kissed the legendary Marlon Brando.

He’s also had a number of memorable gaffes, like calling Beatle Ringo Starr by the name of his band mate George Harrison. His ratings have gone down in recent months, but no one can deny that the retirement of Larry King is television history.

Piers Morgan will be taking over for King next month.