MTV has announced Katy Perry as their number two Woman of the Year. One can only imagine the number one lady is someone who made her little monsters go gaga, but Lady Gaga nabbed that honor last year, so we’ll have to wait until December 17 to find out for sure. 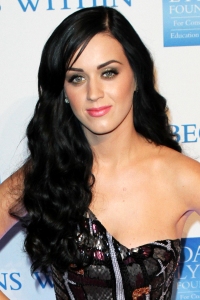 Katy Perry, or should we say Mrs. Brand, has had quite a year. It was such a big one that the new Mrs. Russell Brand has been tapped as MTV’s number two Woman of the Year.

A glimpse at some of Katy Perry’s big 2010 headlines gives a hint as to how she earned the honor, and we’re not just talking about the barrage of wedding news that landed between her January 5 engagement to Russell Brand and the October Katy Perry-Russell Brand wedding!

In 2010, Katy Perry rocked Saturday Night Live, became the new USO and VH1 Diva, was pulled from a Sesame Street special for being too sexy, bared almost all for an Esquire expose and then again for Rolling Stone with sexy shoots and dish about Russell Brand, her music and her religious parents speaking in tongues. Katy Perry squelched Josh Groban romance rumors and launched the fragrance Purr by Katy Perry and a glittery Opi nail polish collection.

Even Perry’s tweets made news, from supporting Brand after his arrest in an airport melee and slamming Lady Gaga’s “blasphemous” Alejandro video to posting pix of her kissing and “tapping” Justin Bieber and taking a nap during fashion week.

SheKnows hasn’t even listed everything Katy Perry got into this year, but we’ve made our point!

The other MTV Woman of the Year runner-ups include Taylor Swift at number three, Snooki at number four and Nicki Minaj at number five.

The person who looks poised to take the number one spot is the only female musician who might have made more press in 2010, Lady Gaga. What makes the Lady a sure thing for MTV’s number one Woman, besides the fact that People mag’s 2010 pick Sandra Bullock isn’t in the music biz, is as much Gaga’s news-making antics and performances as her massive monster following. Lady Gaga broke a Facebook record this year by nabbing 10 million friends!