Director Blake Edwards passed away Thursday morning after a battle with pneumonia. Read on to learn more about his prolific career and life with wife Julie Andrews.

Julie Andrews is mourning the loss of her husband Blake Edwards. Edwards passed away Thursday morning at his home in Santa Monica, Calif. from complications of pneumonia. He was 88. 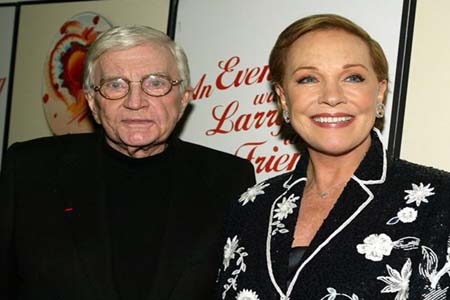 Andrews and other family members were at his side when he passed, according to The New York Times.

Edwards was born in Oklahoma and his family moved to Los Angeles shortly after his birth. He served in the Coast Guard during World War II before returning to Hollywood.

He first broke into show business as the writer for the 1946 Western Panhandle. He quickly moved on to direct films like Breakfast at Tiffany’s, The Pink Panther films and Days of Wine and Roses.

He married Andrews in 1969 after directing her in Darling Lili.

He even referred to Andrews as his “beautiful English broad with the incomparable soprano and the promiscuous language” during his 2004 acceptance speech for an honorary Oscar.

Edwards is survived by Julie Andrews and their five combined children, Jennnifer and Geoffrey (from his first marriage to Patricia Walker,) Emma (from Andrews’ first marriage) and the couple’s Vietnamese adopted daughters Amelia Leigh and Joanna Lynne.