Olivia Wilde is having quite a year. After finishing her run on the smash TV show, House, Wilde is primed for a career breakout with her turn in Tron: Legacy and the upcoming Cowboys versus Aliens.

Wilde is the picture of old Hollywood elegance as she meets us in Beverly Hills. She sat seats away from us at the Tron: Legacy screening and her excitement while witnessing the final product after all her hard work was palpable. 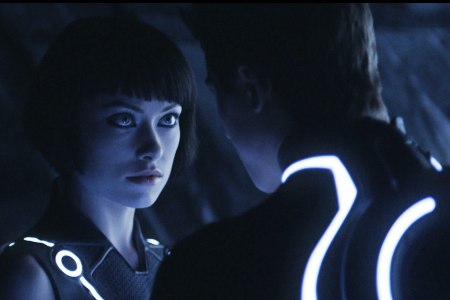 Tron: Legacy is a sequel 30 years in the making and Olivia Wilde, co-star Jeff Bridges and the rest of the filmmaking team are primed for audiences to finally see all the magic they’ve created as the sequel arrives in theaters in eye-popping 3D.

Olivia Wilde wins us over

SheKnows: You sat next to us at the screening last night, what were your thoughts as you saw this film come to life?

Olivia Wilde: It surpassed all my expectations. You know what happens so often as an actor is you retain the information about the scene that you yourself shot and you obsess over certain scenes that you found the most challenging or interesting. And the rest of the film kind of falls away in your memory or it fades a little bit. You know it’s been so long since I actually kind of read the script in its entirety, a good year or more. So being able to watch everyone’s performance, watch all elements of the story come together was just extraordinary. And I was blown away by everyone’s work and that was my reaction was just, “Oh my God, everyone pulled it together.” Everyone did things they’d never done before and it was for so many different departments, so revolutionary. And being able to watch Michael Sheen’s performance was really a treat for me. I think that was probably the most astounding thing — just being able to see the entire picture together and realize how much hard work paid off.

SheKnows: How much influence did you have into your look in Tron: Legacy with those leather outfits?

Olivia Wilde: It was a true collaboration to create Quorra. And when we originally started putting together ideas, it was really kind of up for grabs because Quorra, of course, was not in the original film. And Joe Kosinski [director] was very interested in making her a unique and an unusual femme — not even femme fatale — a female heroine. This type of film is unlike any other, so we worked very hard to make her very intelligent and powerful but at the same time childlike and nuanced. We didn’t want her to be there as a foil for the men — not just the eye candy. That character could have easily turned into the temptress of the Tron world. She could’ve just been this sexy femme fatale. With a suit like that, it’s easy to fall into that [laughs]. But because Joe was adamant that she not be that, I worked very, very hard to create someone who is not that. We were able to work together to create Cora. We were very inspired by Joan of Arc. I brought up the concept of Joan of Arc very early on — six months before we started shooting.

SheKnows: How do you think women will be inspired by your role in Tron?

Olivia Wilde: I want girls to feel inspired by her strength and her wit and her intelligence and her compassion. I think that it’s rare these days to have a female character in these types of movies that isn’t just there to look really sexy in a suit. Too often that’s what happens and you wonder, “Who did these little girls dress up as for Halloween?” [Laughs] You know, when I was little, we dressed as Wonder Woman. And Wonder Woman represented social justice and honesty.

SheKnows: Now that you’ve seen the entire film, what do you think the overriding theme is?

Olivia Wilde: The message is that imperfection is beautiful. The idea of accepting flaws is strong. The story is one of a dictator who has ethnically cleansed this universe. The message, I think, is that of compassion, humanity and humility.

SheKnows: Between House and your movie roles, your career is really taking off. What has the last year of your life been like?

Olivia Wilde: I feel like the luckiest person on the planet. Tron was such a departure for me. Cora was unlike anyone I have ever played before. I got to create someone who was unlike anything anyone had ever seen me do before. So after that, I was really excited about doing that again — departing from myself and transforming. Because beyond the physical transformation of Tron, it was really just quite a transformation on many levels. It’s been a really, really incredible year and every single thing I’ve done has been very different from last. Now it seems to all be kind of bubbling to the surface and I’m very proud.