Mariah Carey and Nick Cannon are buying double when it comes to their new bundle of joy — or should we say bundles? It’s true, Carey and Cannon are expecting twins! 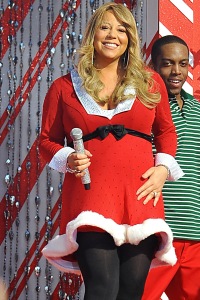 “In order for my wife and I to have our life, we need to be up front and I need to be able to share things with you and be real,” Nick Cannon said on his show. “I didn’t even tell my wife I was gonna do this — I’m probably gonna get yelled at for not getting permission — we are having twins!”

Something tells us Nick Cannon might be getting coal in his stocking for Christmas. The news is more of an official confirmation to all the buzz surrounding Mariah Carey’s pregnancy than a tell-all secret.

We know what you’re thinking, how lucky are we to be the first ones to hear the news? Not lucky at all, considering we weren’t first on the couple’s sharing is caring list — President Barack Obama and First Lady Michelle Obama were!

Mariah Carey met the Obama family after performing at a White House Christmas event and she couldn’t keep it in, Nick Cannon explained. “They actually even questioned my wife about [the twins],” he said. “She hadn’t told anybody anything! Because of the excitement and emotion, she shared [the news] with the President and the First Lady.”

So, why all the hush-hush demands on what will probably be the cutest and most talented set of twins to grace the world? “That was something that we were advised to keep close to ourselves,” Cannon revealed. Seriously, Nick Cannon is a gem and Mariah Carey is a powerhouse — those genes can’t be denied.

Congrats on entering a world of no sleep times two Nick Cannon and Mariah Carey, you’re going to do awesome!