Elin Nordegren is getting over her divorce. Tiger Wood’s now ex-wife was spotted with a new man. Who is this mystery man and what does Tiger think about it? 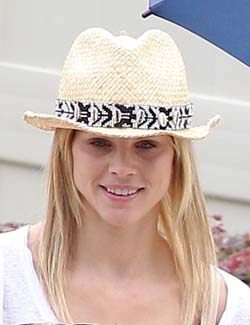 Elin Nordegren is back on the dating scene after her divorce from Tiger Woods. She is reportedly seeing a 35-year-old South African man who is attending the same Florida college as the famous divorcee.

The British publication The Sun reports that the couple have been spotted together, though nothing is confirmed.

“There’s been kissing and cuddling but I don’t know if it’s gone further,” a source told The Sun.

Woods is none-to-pleased with his ex’s new dating life, according to The Sun.

“He was blindsided when Elin dropped the bombshell that she expects to marry again and start a new life with more children – telling Tiger, ‘but it won’t be with YOU!'”

And who could blame her? She first learned of her husband’s multiple affairs over the 2009 Thanksgiving holiday. That revelation led to Woods’ stint in sex rehab and the couple’s $110 million divorce.

Could this new mystery man be Nordegren’s ticket to happiness after her tumultuous 2010? Time will tell, but sources are saying it could get serious.

“Elin is already looking ahead to beginning a new expanded family,” a source told the National Enquirer.

What do you think? Should Nordegren be dating again? Does Tiger Woods have the right to get upset after what he did?

More on love and divorce