Aretha Franklin has been released from the hospital after undergoing surgery for what many are saying is pancreatic cancer.

The Queen of Soul, Aretha Franklin, is home and resting comfortably after being released from the hospital following surgery for an undisclosed condition many are saying is pancreatic cancer. 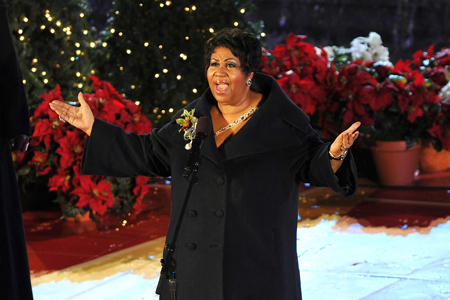 “I’ve been at home for almost three days now,” the Respect singer said in an official statement to fans. “My family and friends who brought me home are taking great care of me.”

Aretha doesn’t plan on lying around, though — she’s already got big plans for the next few weeks!

“I also have a private nurse who visits on a daily basis. I’m hoping to be strong enough to go out and see the upcoming Sam Cooke play at the Music Hall in Downtown Detroit before January 2, as well as a performance of Dreamgirls at the FOX before it closes.”

The singer has been ordered by doctors not to return to the stage until at least May 2011.

read on for more aretha franklin