The woman behind the camera while Miley Cyrus got high on salvia has been revealed! 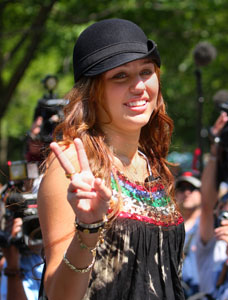 Who was the frenemy who videotaped Miley Cyrus taking bong hits of salvia while egging her on to do more? She has been unmasked as Anna Oliver — and she has a close connection to another Disney star!

It is Anna Oliver’s voice you can hear in the background of the Miley Cyrus drug video saying, “I’m going to document the [expletive] out of this,” and talking Miley into doing more.

But Cyrus is not the only troubled Disney star with whom Anna Oliver has been pals. Turns out she was also tight with Demi Lovato, frequently being seen with her prior to the star’s emotional breakdown.

While it’s not for certain that Anna is the one who sold the video to TMZ — the tabloid is reporting that multiple copies existed and Miley’s team unsuccessfully tried to buy them all — Cyrus fans place the blame squarely on Oliver’s shoulders. And they are out for blood.

Here is just a sample of what some vicious fans are saying on Twitter:

“What would you do if you met Anna Oliver? — Probably kick her teeth in.”

“We should find Anna Oliver and feed her to the lions!”

“Dear Anna Oliver, I know you want to be a little fame whore, but you’re not good at it. We hate your guts. Love, everyone.”

“Anna Oliver needs to be shot.”

“If karma doesnt get Anna Oliver…. i will!!”

“[Expletive] you Anna…the money that you got from TMZ will be used for your funeral!!”

Oliver has deleted her Twitter account and gone into hiding. Miley Cyrus is filming a movie in New Orleans, where she has been joined by her mother for moral support.