More details are emerging in the divorce drama between Elizabeth Hurley and Arun Nayar — and it is not pretty. 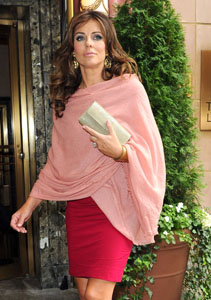 Hurley went back to Twitter to chat about the divorce.

“Painful, sad days. Arun & I separated for private reasons but FTR [for the record] he has been a great father to our son Damian & will always be in his life.”

Damian is the biological son of billionaire playboy Stephen Bing, but Nayar has raised him almost all his life.

Regardless of how long they have been separated — Hurley said it has been several months — Nayar is said to be humiliated and shamed by Hurley’s recent behavior.

“He’s hugely embarrassed and upset,” said a friend. “This will be devastating for him. The family had no idea their relationship was over. It’s very shameful in India and the family will all be deeply shocked this has come to light. Arun is very upset by the whole thing and feels let down.”

As for Liz’s boyfriend, Warne — who up to now everyone thought was also happily married — issued a statement on his blog nearly identical to Hurley’s original tweet.

“Sadly and unfortunately, Simone and I split up a while ago, our close friends and family were informed at that time. It is a private matter so we did not make it public. We remain friends and will continue to be good parents.”

Things are heating up between the two. A source close to the couple says, “Shane has been a real support through the tough time she’s had splitting with Arun. They have grown very close and there is an intimate bond between them. The only thing standing in their way is geography.”

Warne has three children with his estranged wife Simone.