In the upcoming film I Am Number Four, Dianna Agron of TV’s Glee plays a small town high schooler in love with an alien! Alex Pettyfer, who plays the other-worldly fellow, has been snapped holding hands with Dianna on the Glee set. Are they an item? Let’s ask Agron! 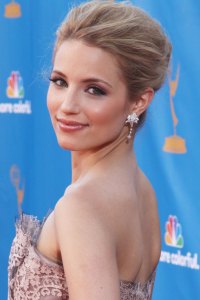 We got the latest from the pretty blonde on her show, her film, crazy weather on set and the kind of relationship she longs for.

Paint a mental picture of Dianna Agron in a classy loose, soft coat over a black lace dress. Her hair is up and her diamond dangle earrings and two delicate diamond dinner rings sparkle as we sit down to chat in Beverly Hills.

SheKnows: John in this film [played by Alex Pettyfer] is marked for death so it’s dangerous to be around him. In your own life, are you attracted to those dangerous guys?

Dianna Agron: [Laughs] No, I don’t think so because I’m not a baddie so I wouldn’t know how to keep up with them.

SheKnows: Your character Sarah in I Am Number Four is always snapping pictures. Is she hoping to be a photo journalist or what?

Dianna Agron: She’s explored this fishbowl that she’s lived in and, for the first time, is feeling at home with herself and her place. She wants to escape behind the camera because it’s so much more interesting to her. It’s a chance to start over when she meets John Smith. Part of her life, she’s wanted and part of it she hasn’t. She had the high school football boyfriend and that wasn’t what she wanted so, for the first time, she’s met somebody who has no judgments and is listening to her and she’s not judging him. They are quickly drawn to each other and let down all the walls and have this really pure, organic feeling for each other. It’s what I loved so much about their characters. You see that that helps them go on this journey together.

SheKnows: Is that the kind of relationship you want in real life?

Dianna Agron: Definitely. I think, in any strong relationship with family, friends or your partner, it’s hard to share everything sometimes because life isn’t always smooth sailing and sometimes you’re afraid of hurting someone’s feelings. I think the truer you can be to yourself, the more you’ll open your horizons to a really beautiful relationship. It’s not always the easier thing to do.

SheKnows: How was it co-starring with Alex in I Am Number Four?

Dianna Agron: It was great. I didn’t meet him until the day before the table read [of the script] and I thought, “Okay, no judgments, he’s British. He’s very attractive. He’s the lead in this movie. Let’s see.” You realize quickly with him, he’s very worldly. He’s from Europe and he’s been travelling and exploring and taking in people from different walks of life his whole life. He was very passionate about this film and what we could explore with it. I think that shows in the trailer. He looks amazing and so focused. I can’t wait to see the whole thing and see how it turned out.

SheKnows: What is this time for you like, promoting this film and jumping back into Glee? Is there any time for yourself? 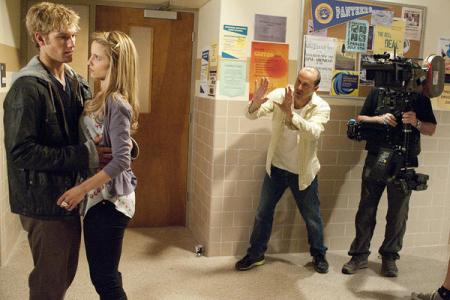 Dianna Agron: Well, you have to make it. I went home last weekend because we’re going to London to promote the film (she wasn’t home for Thanksgiving). If family and friends are important to you, you make sure that you set aside that time and carve it out. At the same time, since I was fourteen years old, I had a job and was going to school and was dancing, so I’ve liked being too busy rather than not being busy enough.

SheKnows: So you’re not complaining that you’re working all the time?

Dianna Agron: Not most days. Every now and then you might want to sleep in a bit especially with the wonderful, gloomy weather that reminds me of home [San Francisco].

SheKnows: How did you start out in the business so young?

Dianna Agron: I started out as a ballerina and fell in love with movies like An American in Paris and Singing in the Rain. That was what I was raised on. I wanted to be like Audrey Hepburn but, at the same time, I was watching Lucille Ball and thinking she’s so fabulous. I wanted to be both of them. I started acting in high school and, toward the end of high school, I realized, as I was applying to schools [college], that this was something I’d always loved. I told my mom and she said, “There’s a lot of down time on sets.” [I said], “That’s okay. I’ll read a book.” I thought it would be great to give it a shot.

SheKnows: You spent three months in Pittsburgh filming I Am Number Four. What do you remember most? 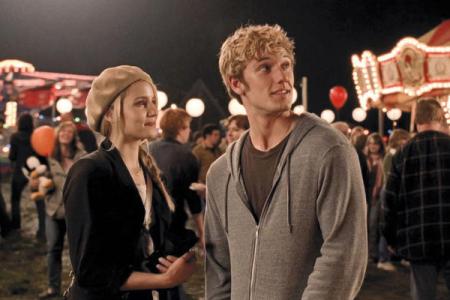 Dianna Agron: Erratic weather which led to the most wonderful experiences. It was comical. We were always filming outside of Pittsburgh in beautiful towns with lush trees and bushes — a wonderful set-up for an Ohio feel to this movie. The people were so kind and so in awe of the movie. It was a childlike wonderment about the whole process and that’s great, as an actor, to see because you realize it’s such an uncanny thing for so many people. It becomes a job and so normal and you realize it’s not to most people. It would be sunny, then torrential rain and mud up to our ankles. Our producers were on their iPhones checking weather aps, “Okay, the storm is gonna pass in five minutes but it’ll be back in ten minutes and leave for thirty minutes.” So they’re saying, “We have time for one take, then cover the equipment with tarps.” “Okay, I can’t screw this up. We only have one take.” It was so funny. You watch it now and don’t see any of that. That’s the beauty of it. Watching the film will never be as fun as making it. The experience is the best part and watching, you know the backstory to every single moment. 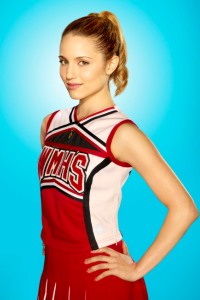 SheKnows: Let’s talk Glee. Who do you wish they’d feature as a guest artist?

Dianna Agron: I keep campaigning for Christopher Walken because I love him. He’d be amazing. I’m such a music lover and I like to be surprised when I read the scripts and see who they’ve chosen. I like it when it fits the storyline. With that job, it’s “whatever you throw at me I’ll try to take and run with it.”

SheKnows: There is a lot of rehearsal and recording on the show. How many episodes are you working on at the same time as far as recording for one show, learning a dance move for another?

Dianna Agron: Now, it’s come down to week of, day of and hour of. There is so much to do that there have been some days, like in the Sectionals episode we just shot, where we were learning the dance moves the day of, in the morning and then shooting. That was insane and we really had to focus but we got it done. It’s a challenge sometimes. The episode that we’re doing for the Super Bowl is massive and going to take a lot of focus.

SheKnows: What goes on in your mind when you hear you’re going on after the Super Bowl and doing Michael Jackson songs? It’s the most expensive episode you’ve ever done. There must be great pressure coming with that.

Dianna Agron: Yeah. I read that script yesterday. Before I could digest it, it was all about “so what are we doing today?” It has to be about what we are doing today, day by day on the spot. I’ll try not to be nervous.

SheKnows: What reaction are you getting from fans when you go out?

Dianna Agron: I’ve noticed that whatever energy you put out is what you receive so I’m a very mellow person. People are really lovely and kind and soft-spoken with me. Our fans are so nice and so loyal. Nobody comes up and says, “I hated last week’s episode.” People come up with things they relate to.

SheKnows: How is it to bounce from TV to the big screen?

Dianna Agron: I think I had no time to think about it so it was pretty easy. But, it was great and luckily they both let me [go back and forth].