Mariah Carey showed off her baby bump and belted out holiday spirit on her ABC special, Mariah Carey: Merry Christmas To You. 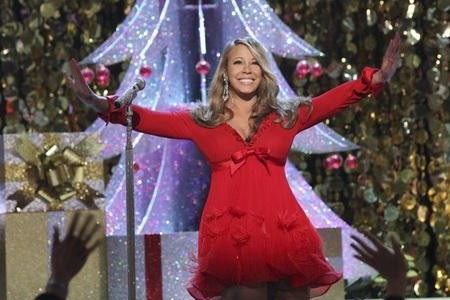 Carey kicked off the show with her new single from the new album, Oh, Santa! and rocked her baby bump for 45 minutes before closing with the Carey classic, All I Want for Christmas Is You.

The Carey women teamed up for Mimi’s new album and as they shared the stage for the first time to sing rousing renditions of ‘O Come All Ye Faithful and Hallelujah Chorus, it was crystal clear where Mariah got that instrument of hers!

American Idol host and Carey collaborator Randy Jackson also chimed in, bringing some holiday hip-hop from the album to the show. He and Carey got groovy for Here Comes Santa Claus (Housetop Celebration).

Carey brought things down a bit, as well. In addition to cutting down the back-up action for Christmas Time Is Here and Joy to the World, Carey shared the spotlight with Make-a-Wish child Mackenzie, who needs a kidney, and dedicated Christmas Time Is in the Air Again to her.

43 mins ago
by Tabby Kibugi