The Chronicles of Narnia: The Voyage of the Dawn Treader won the weekend box office battle, but it wasn’t much of a fight. Angelina Jolie and Johnny Depp’s spy romance The Tourist eked into second.

The Chronicles of Narnia: The Voyage of the Dawn Treader banked $24 million this weekend for the U.S. box office win. Narnia took the weekend, in part, thanks to the boost of 3-D ticket sales, with half of moviegoers opting for the bigger show. 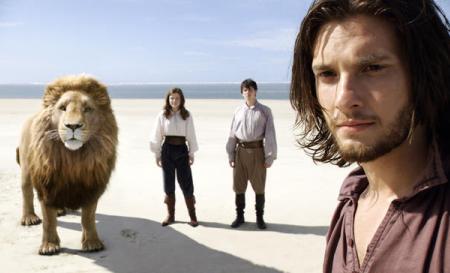 While the box office win won’t help The Voyage of the Dawn Treader recoup its reported $155 million budget, the international interest is sure to help. The movie brought in $81 million overseas, for a worldwide opening take of $105 million. The movie may ultimately break even, but these numbers are not good tidings for another Narnia installment.

In spite of how slow the movie biz is these days, it’s hard to believe two of Hollywood’s most bankable stars opened The Tourist with only $16.5 million. The Tourist may have sunk under poor reviews, but whatever the cause, Angelina Jolie and Johnny Depp’s romantic spy spree through Venice and Italy just didn’t lure in viewers.

Unstoppable stayed in the top five with $3.7 million, but the Denzel Washington flick is an example of yet another star vehicle that isn’t getting enough attention to cover costs. With a big budget of $100 million to recoup, Unstoppable has only banked $74 million in five weeks.

Black Swan came in just on the tail of Unstoppable, taking sixth with $3.3 million. The Natalie Portman and Mila Kunis ballet thriller is only playing in 90 theaters, proving what a difference substantial Oscar and awards season buzz can make.

Burlesque took seventh this weekend with $3.2 million. The Cher and Christina Aguilera vehicle is still $25 million away from covering production costs. Love and Other Drugs and Due Date came in eight and ninth, respectively, each bringing in around $3 million this weekend.

Megamind closes out the top ten. This weekend’s $2.5 million brings the animated Will Ferrell and Tina Fey comedy up to a $140 million total take.