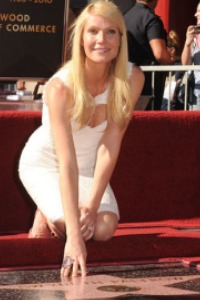 December 13 was Gwyneth Paltrow day in Hollywood. The multi-talented actress was honored by her peers and friends as she received her very own star on the Hollywood Walk of Fame.

She’s 38 years old, coming into her own musically with Glee and Country Strong, has a body many would die for, and an Oscar, why shouldn’t the busy mother of two who makes it all look easy have a star on the Hollywood Walk of Fame?

Glee’s Matthew Morrison and country power-couple Tim McGraw and Faith Hill helped honor Gwyneth Paltrow outside Madame Tussauds celebrity wax museum as she gets set to usher in her latest movie Country Strong in limited release December 22 and nationwide January 7, 2011. Having been in a slew of films, including the Iron Man franchise and The Talented Mr. Ripley, it was her role in the 1998 movie Shakespeare in Love that won her the Academy Award for Best Actress.

Paltrow’s star on the Hollywood Walk of Fame also comes right on the heels of the news that she’ll be returning to reprise her role as Glee’s substitute Spanish teacher, Holly Holiday. We can only wonder how many Gleeks will be booking their trips to the West Coast to snap a picture with the star belonging to the actress they’re falling in love with.

Congrats go out to Gwyneth Paltrow on her continued success.