The 2011 Golden Globe nominations are in and Nicole Kidman, Jim Parsons and Michael Douglas are over the moon about being included in Hollywood’s most laid-back awards show. 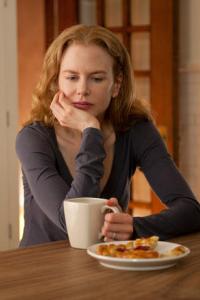 The 2011 Golden Globe nominations were announced December 14 and during the wee hours of the morning, the stars being honored were processing Hollywood’s grand honor.

If you’re wondering what some of your favorite celebrities were thinking when they got the news they were nominated for this year’s Golden Globes, SheKnows has got you covered. Here are just a few thoughts from A-list nominees including Nicole Kidman and The Big Bang Theory’s Jim Parsons.

“It’s always too early to say ‘Bazinga!’ no matter what time of day it is,” Emmy winner Jim Parsons said in regards to his Golden Globe nod for best comedy actor on television. This is The Big Bang Theory actor’s first Golden Globe nomination. It wasn’t his best actor nomination that made him the most thrilled, however, it was something more simple than that. “I’m really floored, and we all get to sit at that table together now. I won’t be sitting next to a stranger!”

Michael Douglas has had a challenging year personally, fighting his battle with throat cancer, but that didn’t stop him from doing what he does best — acting! The Wall Street 2: Money Never Sleeps actor was ready to just be happy and revel in his big screen nomination for best supporting actor in a drama. “To be selected with these extraordinary nominees is an honor and boy was I ready for some good news!”