Hugh Jackman made a big entrance during an Australian taping of The Oprah Winfrey Show, but it wasn’t his entrance that made news. Jackman’s zip-line crash landing has everyone talking — including Hugh himself. 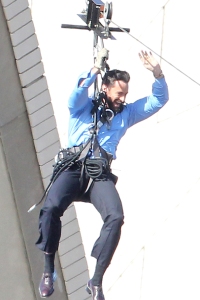 Oprah Winfrey is enjoying Australia with a few hundred members of her studio audience as the land Down Under welcomed the queen of talk for her last season.

No one was more excited to welcome Winfrey than Australia’s own Hugh Jackman, who bravely “zip-lined” from the Sydney Opera House to an outdoor stage, surprising the lady of the hour. But according to a report from Reuters, it was Jackman who received the surprise, over-shooting his stop and slamming into the lighting area — face-first!

Don’t worry, Hugh Jackman will be fine and all it reportedly took was a swig of red wine and some ice to get him back on track and chatting with Oprah.

“That was so much fun, until the end,” Jackman said, laughing off the stunt. “I came down waving to everyone, looking over Sydney Harbor, saw my dad, the kids and you [Winfrey], went to pull the brake and then boing.”

Jackman showed up on the show after attending to his war wounds, which included a bandage “under one of his eyes.” Turns out it was a simple case of just being too “excited” that caused the Aussie actor to miscalculate pulling the brakes. A little black eye didn’t stop Hugh Jackman from giving Oprah Winfrey some much needed advice on eating Vegemite.