Emma Stone has a stardom coming out party in Easy A. After scene-stealing roles in Superbad, Zombieland and The House Bunny, Stone makes an acting announcement that rocked the year in movies with Easy A. Stone was just announced as a Golden Globe nominee for her role in the hit comedy. 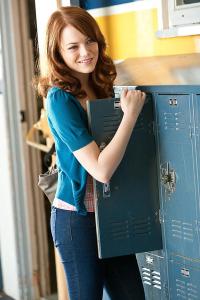 Easy A will be one of SheKnows Entertainment’s Top Movies of 2010 [premiering in days!]. To whet your appetite for the dark comedy that is beyond hysterical, we are proud to present an exclusive clip from the summertime smash.

Available to bring home currently for audiences, Easy A is in the league of high school films such as Election, Heathers and yes, Ferris Bueller’s Day Off. A film out of Hollywood has finally arrived that reflects the times.

In Easy A, when the titular character, as played by Emma Stone, lets a lie about her virginity being lost become fact thanks to the social media maelstrom, the wit and sharpness of Easy A arrives. Now available on DVD and Blu-ray, the dark comedy is not only one of the best female-centric films of the year, but firmly entrenched in our top five [can’t believe we let that cat out of the bag!].

Stone is joined in the stellar cast by one of the best pair of parents on the movie planet, Stanley Tucci and Patricia Clarkson. Also turning in incredible work in Easy A is Hellcats star Alyson Michalka and Cougar Town’s Dan Byrd, as well as the thank-goodness-she-unretired Amanda Bynes as a passionate religious instigator and Gossip Girl’s Penn Badgley.

In our exclusive scene, Emma Stone herself takes us inside the brilliance that is Easy A.

Read on for more Easy A