Oprah capped off her celebrated visit to Australia with visits from several Australian stars, set to air on The Oprah Winfrey Show in 2011. 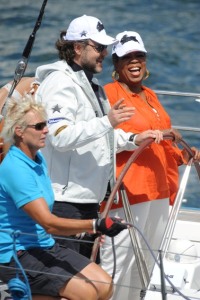 Hugh Jackman, who actually lives much of the year in New York, almost blinded himself while rappelling down the side of the Sydney Opera House to the stage. After smacking his face on some scaffolding, Jackman was examined by paramedics and given the all-clear after downing a glass of red wine.

Robert Irwin was just a toddler when his father died, but the now seven-year-old says he watches videos of his dad every day.

“It’s so good because it’s like he’s actually there,” Robert said, instantly reducing his mother, Terri Irwin, and the rest of the crowd to tears.

“Living with Steve was like standing in a cyclone,” Terri said. “Then we lost him. It was like the wind stopped.”

Watching the show from inside the Sydney Opera House were students from a local boys school, invited by Jay-Z himself after one of the boys wrote to Oprah saying how much he loves the rapper. 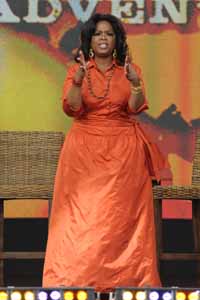 Oprah gave them the shock of their young lives when she announced they would all receive a free laptop.

“Now, no excuses not to do your homework!” Winfrey shouted.

Oprah also gave all 6,000 people in the audience native Australian pearl necklaces, and a cancer-stricken man $250,000 to help his family pay the bills.

read on for more oprah