Lucy Lawless is back in the Spartacus fold for Spartacus: Gods of the Arena, this January. John Hannah and Peter Mensah also return for the Spartacus: Blood and Sand prequel, along with a short appearance from Andy Whitfield, and Aussie Dustin Clare joins the cast. 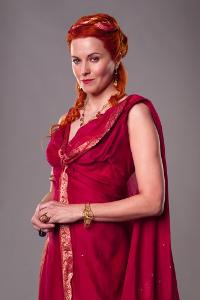 “Gods of the Arena is going to astound and amaze you,” exec producer Steven S. DeKnight promised. “It’s a six-episode prequel centering on the House of Batiatus and the intrigue and action that took place before the arrival of Spartacus.”

Spartacus: Blood and Sand faves like Lucy Lawless, John Hannah, Peter Mensa and even Andy Whitfield will return for the prequel on January 21, but this new house also means a new champion, Gannicus.

“Dustin Clare, our new gladiator Gannicus, is absolutely phenomenal,” DeKnight previewed. “I think you guys are going to really love him.”

For those who are curious about all the hype around Spartacus: Blood and Sand, the prequel may be a good place to join the fun. The six-part tale fills in the story from season one and sets up the story for season two, but there’s more to it than that.

“It stands by itself as a story,” DeKnight said. “If you didn’t see season one, you can completely enjoy and understand exactly what’s going on. It’s a complete stand alone experience.”

Spartacus: Gods of the Arena also won’t hold back on the notorious deception, violence and sex of its predecessor.

Spartacus: Blood and Sand fans were shocked when the Starz series killed off Lucy Lawless’ Lucretia and were sad to see John Hannah’s Batiatus go, as well. The prequel gives fans a chance to see them in action again, but show creators have also found a way to bring Lawless back after the prequel.

“She was still twitching at the end of season one,” DeKnight teased. “Lucy will be back in season two. And where the story goes with her is really something special. I’m very excited about that.”

Production on season two was delayed, however, due to the health of series fave Andy Whitfield.

The Spartacus prequel came to fruition after Whitfield was diagnosed with non-Hodgkin’s lymphoma in March. The Gods of the Arena storyline had been envisioned as a season two flashback that would give the show a chance to bring back Hannah’s Batiatus, but it was expanded to cover Whitfield’s recovery.

Whitfield was in remission and gearing up for season two, but was unfortunately thrust back to his real life battle with cancer in September.

“It’s with a deep sense of disappointment that I must step aside from such an exceptional project as Spartacus and all the wonderful people involved,” Whitfield said. “It seems that it is time for myself and my family to embark on another extraordinary journey.”

This leaves the Spartacus 2011 fall season up in the air, with much murmuring about a recast. Stay tuned for updates on season two.

In the meantime, Spartacus: Gods of the Arena hits Starz on January 21.