The Pirates of the Caribbean franchise starring Johnny Depp is set to release its fourth installment on May 20, 2011, and we have your first stills and the premiere of the trailer!

Johnny Depp returns as Captain Jack — a role the actor clearly has an affinity for as he is the only series regular to return for the fourth film — in Pirates of the Caribbean: On Stranger Tides.

Where Keira Knightley once stood, a new superstar actress has stepped in to fill the femme fatale role, Oscar winner Penelope Cruz. 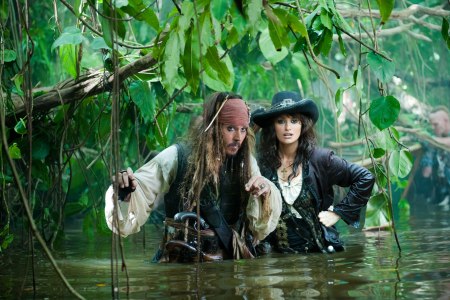 Cruz plays a mysterious woman from Captain Jack’s past who compels him to board the Queen Anne’s Revenge, a ship led by the pirate Blackbeard [Ian McShane]. Depp’s Captain Jack is not sure if his heart is still feeling the pull of a romantic past with Cruz’s character or if he’s drawn to the intrigue of another adventure.

Pirates of the Caribbean: On Stranger Tides pits the great pirate Captain Jack against one of maritime lore’s most dangerous pirates in Blackbeard. By the end of the film, filmmakers promise, Jack won’t know who is more dangerous, Cruz or Blackbeard himself. 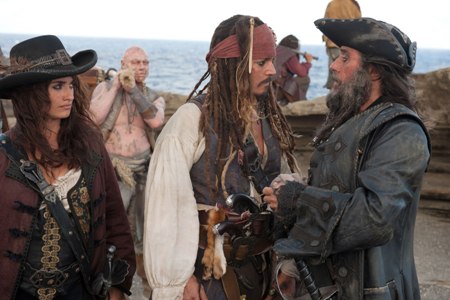 The Disney film arrives in theaters in May in 3D and promises to keep up the romance and Pirates of the Caribbean escapades with Blackbeard and Jack’s journey to the legendary Fountain of Youth. Will they find it? Does it even exist and if it does, how will Captain Jack deal with immortality? One thing’s for sure: If they find the Fountain of Youth, look for another slew of Pirates of the Caribbean movies with Depp joyously revisiting one of his favorite characters to the delight of audiences.

Pirates of the Caribbean: On Stranger Tides trailer