Ron Howard is one of Hollywood’s most successful and popular directors. Of course, Howard has done a little acting in his day. He famously played Opie on the Andy Griffith Show as a child, starred in Happy Days, and served as George Lucas’ central character in the iconic American Graffiti. But it is Howard’s directing career that has solidified his place in the film world as one of its brightest stars.

We’re catching up with Ron Howard on the set of his latest film, his first comedy in years — The Dilemma. The film arrives in theaters January 14 and stars Vince Vaughn, Kevin James, Jennifer Connelly and Winona Ryder as two couples with a secret at their center that may destroy a marriage and potentially a friendship. 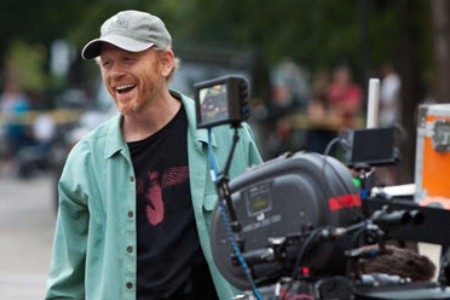 Howard yelled “cut” and strolled over to talk about The Dilemma with us, as well as dish a few priceless stories of his four decades in film.

SheKnows: I am curious, what have you found with Jennifer Connelly — who you directed to an Oscar win in A Beautiful Mind — a stellar actress who really hasn’t done many comedies?

Ron Howard: No, she hasn’t. We met a lot of women and talked to them and thought about it. Jennifer, I’ve always wanted to work with her again, and Vince is a fan. While their story is important and it’s a love story and you want to care about it, it’s not really trying for a rom-com vibe. And in life, you know, she has a great sense of humor and we tapped into that, but her character doesn’t have to carry the movie comedically. But she does have to bring a real perspective and dimension into it and help raise the stakes in as much as you’d like to see she and Vince work it out and land on their feet in their relationship. You’re rooting for them.

SheKnows: How has it been different than directing her in A Beautiful Mind?

Ron Howard: Well, she’s great and we certainly talked about the differences before getting into it. The thing I’ve probably been most impressed with her is that Beautiful Mind was very tightly scripted and, sure, we deviated a little bit. I’m always open to that. But that was a real triumph of thought, planning and execution. Russell Crowe was the one who really had to gamble and experiment every day with what he was doing. It’s because he was dealing with the mental illness and we weren’t sure where that should lead us in each scene. But as far as Jennifer’s character, it was all pretty clear. Here in The Dilemma, it’s so much about reacting to her guy, Ronnie. So when we drift into those free takes and improv, that’s alien territory for her. And she’s been great. She’s been generating a lot of comedy and also just riding with whatever’s going on, making it real and taking the scene wherever it goes. I’ve been really impressed with it. But it’s a very different kind of character and a very different set of scenes. So it’s been really fun to work with her this way.

SheKnows: What scene did we see you shoot today?
Ron Howard: We’re doing a scene at B&V, which is a place that is Vince and Kevin’s place of business. Kevin plays a [car] engine designer and his partner, Ronnie, is more of a salesman. They’ve got this independent project with a very tight deadline — lots and lots of pressure. Their company is on the line and there’s this moment that is kind of a threshold moment where Vince’s character has to decide how much of this secret he’s just discovered that he wants to tell Kevin. He doesn’t really know all the details, which is kind of the comedy of the story. He never really knows. He’s constantly putting the puzzle together — or trying to. It gives him this uncertainty. It’s this real pressure of both guys knowing that something is bothering the other one. No one really knows what. This is a scene where they’re both sort of fishing around and both kind of trying to figure that out.

SheKnows: You obviously can make any movie you want. What compelled you to make The Dilemma? 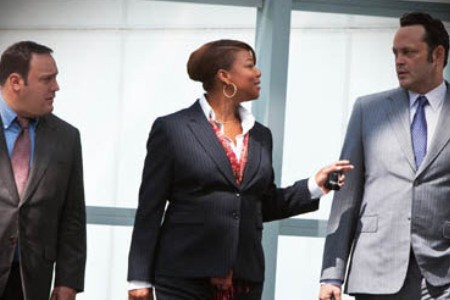 Ron Howard: I thought that the characters were really interesting. It was really sort of tailored for Vince — or designed with him in mind. I thought he’d be great in it and he’s fantastic. He’s just incredibly creative and inventive and has just brought a lot to the character. I’ve been interested in trying to find a comedy to do again. I sort of missed it in certain ways. I looked around and realized that it had been a decade or more since I’d done one. It was always hard to find stories that I felt were, in and of themselves, fresh enough and intriguing enough so that, directorially, there would be some fun to have with that as well. This is kind of a comic psychological thriller. The characters are great, the scenes are funny. But the situations ring true and they lend themselves to a kind of cinematic urgency and visual approach that is a little bit different than you would do in a straight-ahead character comedy.

SheKnows: Why shoot in Chicago?

Ron Howard: Both he [Vince Vaughn] and Allan Loeb are from Chicago. It seemed natural. I think, as I’ve come onboard, I’ve been more interested in making it about a place. So I’ve pushed that a little bit. Vince has been a great guide in that regard. We didn’t have the Blackhawks in the movie in the first draft or Weiner Circle. Now we have key scenes in those environments. I also think that Sal Totino is really enjoying shooting here. He only ever shot commercials here before. I loved it 20 years ago doing Backdraft, which used the city in a very different way. But it’s been great. The other thing that I really like about it is that there’s kind of a — Vince’s terms — but a very modern set of relatable relationship issues, but we’re doing it in a very Midwestern badass way. It has a different flavor that has really emerged through the rewrites, though the rehearsal. We’re getting a little bit more comedy out of it, but it’s also giving it all a different flavor, a different vibe. I’m really happy about that. If this story played out in New York or LA, I think it would maybe have a little more familiar sound and rhythm. That’s something I hadn’t necessarily bargained for. I just knew that I liked Chicago and that it was different.

SheKnows: Are there lessons you learned about working on comedy as far back as Andy Griffith and Happy Days that you still apply?

Ron Howard: Definitely. I haven’t thought about them in a long time but my instincts are to try to find what’s funny and still rings true as much as possible. So that’s probably why I was inclined to take on a story like this as opposed to something that’s broader and more slapstick and more kind of heightened. I think Happy Days certainly got big and broad but from the cast standpoint and I think even the writers — outside of the fact that Fonzie could snap his fingers and make things happen, jukeboxes turn on, girls show up — it was otherwise a kind of heightened version of the real world. Andy Griffith was certainly that. I remember as a little kid, six or seven years old, Andy saying, “I know it’s funny, but this just doesn’t ring true. We can’t sacrifice the characters just for a joke.” That was the tone and style of that show as opposed to, say, Beverly Hillbillies, which was using kind of rural country people to great comedic effect. But that’s a different tone. That’s a different style. And I’m not, by the way, a comedy writer. But I’ve grown up around comedy and I’m a really good audience. That’s why a situation like this working with Vince and Kevin is really fun for me.