Carrie Fisher believes those old rumors that John Travolta is gay, and she talked to The Advocate about it. 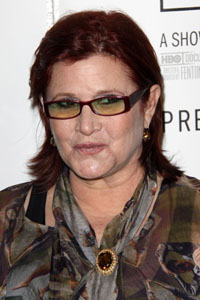 Last year Carrie Fisher told Out Magazine, “We don’t care if John Travolta is gay.” In the wake of Travolta’s lawsuit against Gawker for publishing a piece about Travolta getting it on with dudes at bathhouses, The Advocate asked Fisher to elaborate. Here’s how it went down.

The Advocate interviewer asked Fisher, “I know you and Travolta go way back, so let’s get really blunt here: Does his (Travolta’s) legal team have any business demanding Gawker remove a recent post suggesting that he’s given [expletive] jobs?”

“Wow! I mean, my feeling about John has always been that we know and we don’t care,” Fisher replied. “Look, I’m sorry that he’s uncomfortable with it, and that’s all I can say. It only draws more attention to it when you make that kind of legal fuss. Just leave it be.”

Carrie Fisher and John Travolta have been friends for decades, but it’s safe to say she won’t be invited to little Benjamin’s Scientology welcome-to-the-world ceremony.

Multiple men have come forward through the years alleging sexual relationships with Travolta, who has maintained the Scientology line that he is totally straight — despite being caught by paparazzi kissing a male friend on the lips.

Like Carrie Fisher says, we don’t care either way.