Elizabeth Hurley announced she is divorcing her husband of three years after reports surfaced she was cheating. 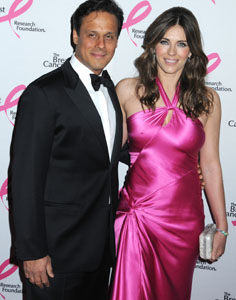 Elizabeth Hurley wed Indian textile heir Arun Nayar a mere three years ago, but the magic is already gone. The model-actress announced on Twitter that the couple has split following a report in News of the World that she’s having an affair with cricket player Shane Warne.

“Not a great day. For the record, my husband Arun & I separated a few months ago,” Hurley wrote on Twitter. “Our close family & friends were aware of this.”

News of the World had hard proof to back up their story of Elizabeth Hurley cheating. They had photos and video of the star kissing Warne, and witnesses who said the pair spent the night together at London’s Bentley Hotel last week.

Hurley and Nayar wed in March 2007 in two over-the-top lavish ceremonies — one in a Jodhpur palace, the other in a British castle — after a five year courtship. They have no children together, although Hurley does have an eight-year-old son with multi-millionaire businessman Stephen Bing.