SheKnows visited with the handsome, African-born actor Djimon Hounsou and got the scoop on his family man status and intense love for his first born son Kenzo (with wife Kimora Lee Simmons). We learned just how instrumental family love and support were in aiding the talented actor to go after and win the part of Caliban in Julie Taymor’s magnificent, femme-centric version of Shakespeare’s The Tempest. 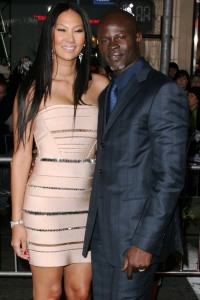 After his notable turn in the Spielberg-directed slave uprising film Amistad, Djimon Hounsou received accolades from a Hollywood that then tended to typecast him. After excellent work in Blood Diamond with his friend Leonardo DiCaprio, his sensitive role in Gladiator and a turn as the hunky guy next door opposite Queen Latifah in her romantic comedy Beauty Shop, Djimon [pronounced Jeye-mon] had expanded his acting horizons.

Having done a screen test for writer-director Julie Taymor for her Shakespeare-based film Titus and failing to get the part, Hounsou was devastated and realized that he had to work on his command of the English language before he could conquer Shakespeare. Now, as a magnificent Caliban in The Tempest, the actor has faced and beaten his inner demons. He also credits pal Leonardo DiCaprio for giving him great advice on taking on “The Bard.”

SheKnows: You mentioned that your wife Kimora had encouraged you to go to this meeting with Julie about the Caliban part. Did she say she knew you were ready for this?

Djimon Hounsou: I guess indirectly, that’s what she implied. My first experience with Julie (Taymor, writer-director) was with Titus. That was such a headache! That screen test so haunted me at that time because I wanted the part and I’d just finished Amistad and that was with Spielberg. Everyone was saying, “Well, you worked with Spielberg and did a great job. It was a very powerful character you played so what else is left to play?” I had just started [in the business] and everyone thought there was no need to award someone who came from that environment [an African country]. That’s how they were looking at me [a black man playing a slave] and I was a bit offended by that. People feeling like there’s nothing else for you to play limits you and I didn’t want to be limited. All that was in the mix.

SheKnows: There are many English-speaking actors who can’t handle Shakespeare. Do you think you were asking a lot of yourself back then as far as mastering the language was concerned? 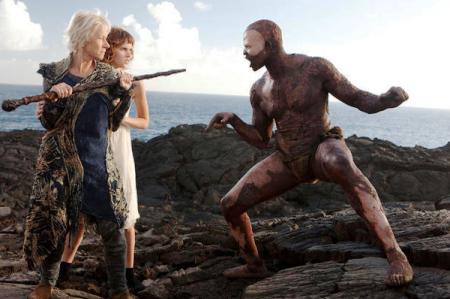 Djimon Hounsou: At that point, yeah. I was expecting a lot from myself and it was a letdown when I didn’t get that part. That stayed with me. [For Tempest] I thought, “What is Julie doing calling me? We’ve been through this once already.” I was struggling with that and Kimora encouraged and championed me to go and just to listen to what Julie had in mind. So, Kimora drove with me over there all the way to Julie’s apartment building in New York. I left her with the kids on the street, and she was very pregnant then, to just roam around and I went to the meeting. Afterward, I called her to come up because we were talking about Africa and this and that. She came up and it was probably my best audition ever. It was such a nice family afternoon. It’s like my whole family went and auditioned with me.

Djimon Hounsou: Yes, we actors have to have fun! But with Russell [Brand] it was fun but almost a curse at the same time. He couldn’t keep a shot. He’d be off, “la, la, la” [indicates playing and dancing around]. He’s “blah, blah, blah” about everything he sees. You’ve heard him. But, he’s a wonderful guy though. And Alfred [Molina] would go off too. It was the two of them playing off each other and I was trying to be this serious guy. I’d go through five hours of make-up, come out just a bull, ready to explode and pissed. Then both of them would lighten up the mood. They’d make me sweat a bit and the make-up starts to come off. So that was the downside of all that. 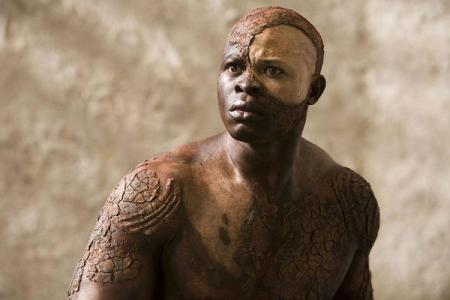 SheKnows: Did you talk to any of your fellow actors or friends who had performed Shakespeare before to get advice?

Djimon Hounsou: Well, my only friend that I knew who had done Shakespeare was [Leo] DiCaprio [in Romeo+Juliet]. I remember telling him, “I don’t know about signing onto this piece. I’m a bit troubled and uneasy about it.” He said, “I know you have to worry about the words but there will come a time when all that will be second nature to you. You’ll just forget about that and it will all be very organic.” I think I did that. I certainly felt I was comfortable with the words.

Djimon Hounsou: Well, yes. A more dignified Shakespeare character is Othello as far as a black man is concerned. Maybe with Julie but I thought Lawrence Fishburne’s version of Othello [on film in 1995] was so good that I’ve shied away a bit.

SheKnows: How is your little son Kenzo and what are you getting him for Christmas?

Djimon Hounsou: [Whole face lights up] He’s great. I have a lot of choices. I’ve not gone shopping yet. I came back ten days ago from shooting overseas in Tajikistan. It’s called Special Forces and we retrieve a journalist captured by the Taliban. It’s the war and we’re soldiers. I’m commander-in-chief of the group that is going to retrieve her. Across the water, we could see Afghanistan and it’s a very primal environment. It’s hard to navigate through that terrain. They are wonderful people but there is something very Stone Age about it. Before coming home, I would Skype with Kenzo. He sees me on the screen and he wants to enter the computer. He’s 18 months now. Mommy would say something, he would repeat it. He’d say, “Baba” — his version of Daddy, and that would put me in another mood. I would be so happy to see him then hang up and be depressed and want to come home. It’s been tough. He’s got so much already so we’ll give him extra love for Christmas.

SheKnows: Do you have a pet project-script in a drawer somewhere that you would love to get produced some day?

Djimon Hounsou: It’s true I do have a piece that is dear to me called Thulsa Doom, a character that appeared in the original Conan the Barbarian film and was played by James Earl Jones. That character is a comic book in itself and they’ve never exploited it. So, I bought the rights and developed it. We’ve got a finished script which I’m reading now and we’re passing it around.