Miley Cyrus has been caught on video smoking from a bong! Is the Disney star out of control? 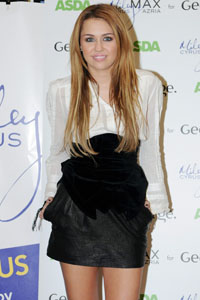 Miley Cyrus celebrated her 18th birthday by getting high — and it was all caught on tape!

In a video obtained by TMZ, the Disney star is seen sucking down a smoke-filled bong, then laughing uncontrollably. She looks directly into the camera several times — obviously aware she is being taped — and starts freaking out because she thinks a guy in the room looks like boyfriend Liam Hemsworth.

But sources close to Miley say she wasn’t smoking pot. So what is Miley’s drug of choice? Salvia, a legal Mexican herb that when smoked can evoke similar effects to marijuana.

According to the DEA, “Psychic effects [of salvia] include perceptions of bright lights, vivid colors and shapes, as well as body movements and body or object distortions.” Some other side effects are uncontrolled laughter, overlapping realities, incoordination, dizziness and slurred speech.

So far, salvia is legal in most US states, including California where the video was taken. If the DEA has their way, though, it might not be for long — they are investigating the drug to see if it should be classified with LSD and heroin. Miley, who turned 18 just days before this video was taken, is perfectly within legal bounds.

What’s suspicious about this tape is that the person behind the camera is obviously egging Miley on, telling her to smoke more, that she isn’t high enough, and encouraging her to act even goofier. Is this a case of a frenemy cashing in? So far all that’s being said is that someone must have copied the video from the friend’s camera. Sounds suspicious.