Johnny Depp and Angelina Jolie have never appeared on film together prior to The Tourist. The question on everyone’s mind as the film opens is: Is it worth the wait? Unflinchingly, we answer a resounding yes.

Depp plays an everyman from Ohio who is enjoying the sights of Paris after his wife had died three years prior. It is the first time he felt comfortable leaving the house to actually enjoy himself. Then, he meets Angelina Jolie’s character on a train to Venice and The Tourist takes off. 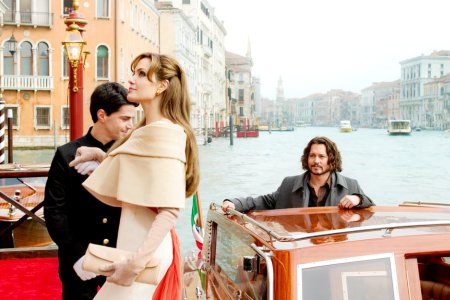 The Tourist is a film that recalls another time. Jolie and Depp’s movie is an homage to Alfred Hitchcock thrillers, old Hollywood glamour and classic cinematic globe-trotting fun.

Johnny Depp and Angelina Jolie are fantastic together. We are hoping that the Jolie and Depp pairing in The Tourist is the first of many films these two will make together over their careers. When asked if Depp and Jolie are the new Hepburn-Tracy tandem in movies, Depp quickly replied, “I sure hope so.” We do as well.

Their screen chemistry pops the second the two meet. After an opening that sets up the basis for both of their characters, Depp and Jolie meet on a train heading to Venice. Depp is quietly reading a book as Angelina seductively asks if she can sit next to him. 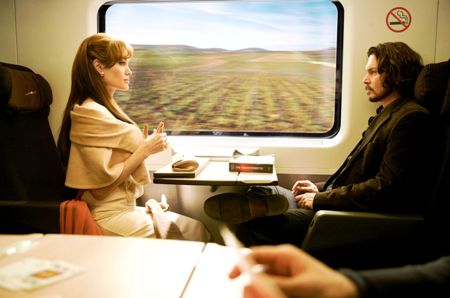 Immediately the two biggest movie stars in the world cause cinematic fireworks. There’s a cat and mouse game being played by these characters in The Tourist that is a joy to witness. Their collective acting prowess knows no bounds and when put in the same scenes together, all cares of the world fade away as the magic of the movies takes audiences on thrill ride.

Also stellar in the film is the supporting cast. Paul Bettany, in particular, shines in his role as a Scotland Yard agent hot on the trail of an international fugitive. Because of Jolie’s cat and mouse mastery, Bettany’s agent is led to believe that Depp is the man he is pursuing for stealing hundreds of millions of dollars from a gangster. It is through Bettany’s eyes that the audience experiences the who-done-it nature of The Tourist. Audiences, and Bettany, never know what is going on entirely until the final scene. Rarely does a film in this genre deliver the payoff until the end as this film does, and yes, some may see it coming, but even still, the ride is still utterly joyous.

Sure, there is the star-wattage and great performances of The Tourist’s two leads and its supporting cast, but what really makes the film work is the direction by second-time director Florian Henckel von Donnersmarck. His Lives of Others is a masterpiece, and although his latest doesn’t possess that film’s bite, it is still masterfully crafted by a director with the most promising of futures.

Jolie was attached to the film first, and it was her wish that Henckel von Donnersmarck serve as director. This is further proof that Angelina is not only a screen presence to be reckoned with, both in terms of acting and box office, but that she also possesses the vision to know which helmer would share her vision for what needs to be done to make a film work. Yes, The Tourist works.