Nicole Richie will reportedly marry Joel Madden on December 11. With one day left before the big day, Richie is missing one important detail — the dress! 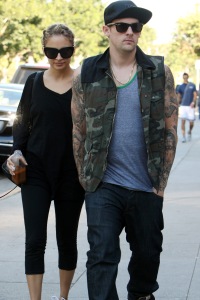 Nicole Richie and Joel Madden have two adorable tots, a loving relationship and amazing friends. The only thing missing are the rings — but not for long. The couple, who have been dating since 2006, is slated to take a trip down the aisle this Saturday at the home of Richie’s father, Lionel Richie. Finally, she’s going to make such a beautiful bride.

A girl’s wedding dress is the critical key to having the fairy tale wedding you’ve always dreamed of and Nicole Richie is no exception. In between doting over her little ones, Harlow, 2, and Sparrow, 1, the fashionista made time to travel to New York City on December 3 for her last fitting at Marchesa. “Nicole brought her stylist Simone Harouche with her,” a source revealed to Us Weekly. “A lot of thought went into her dress — it was a priority for her.” Does that mean Marchesa will be draping Richie on the biggest day of her life? We’ll have to wait and see.

One thing we know for sure is that Nicole Richie and Joel Madden are celebrating with a winter wonderland-themed wedding. Delivery trucks with tables and chairs have been seen at Lionel Richie’s Beverly Hills home and Richie’s wedding planner Mindy Weiss has made sure to invite all of the couple’s closest friends including Samantha Ronson and Khloe Kardashian.

Stay with SheKnows for all the details on Nicole Richie and Joel Madden’s weekend wedding.