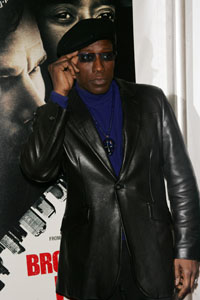 Blade actor Wesley Snipes has finally reported to prison to begin his three year sentence on a tax evasion conviction.

The 48-year-old Snipes reported to the McKean Federal Correctional Institution in Lewis Run, Pennsylvania after trading in his designer duds for a prison uniform. The record shows he was processed “without incident,” which means he didn’t shove any silver stakes in the hearts of vampires on his way in.

Snipes was convicted in 2008 on three misdemeanor counts of willful failure to file income taxes. He was originally charged with six counts of the same offense, plus one count of conspiring to defraud the government and one count of knowingly making or aiding and abetting the making of a false and fraudulent claim for payment against the United States.

The government charged that Snipes did not file any tax returns for the years 1999 through 2004 and that he filed a false amended return including a false refund claim for 1996 and 1997. He was convicted on three misdemeanor counts in 2008 and lost several appeals.

In a recent chat with Larry King, Snipes discussed his fear of being behind bars.