Kelly Ripa is on crutches, seriously slowing down the notoriously busy working mom. So what happened? 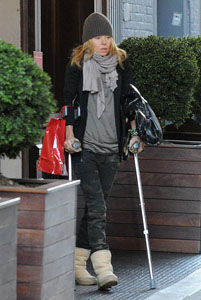 Short story: Kelly Ripa is on crutches because she broke her hip!

“I had an MRI and it turns out I have a stress fracture in what’s called the femoral neck of my right hip,” the Live with Regis and Kelly co-host explained to Regis Philbin and their audience. “So that means no exercise for three to six weeks.”

This might be a far more difficult task than it sounds for the television personality, who is notoriously dedicated to her workout regimen. Ripa can be seen jogging in New York’s Central Park every morning she spends in that city, and her super-skinny frame speaks volumes of the rest of her exercise routine that must go on behind closed doors.

read on for more kelly ripa