We are in Paris, much like The Tourist, except this trip is all business as SheKnows Entertainment has landed to talk The Tourist movie with its stars — Johnny Depp and Angelina Jolie.

It’s snowing in Paris this early December day and Johnny Depp has walked into a Paris hotel suite that looks like something from the Louis XIV days of France. “This room looks like we’re here to sign a treaty,” Depp said and laughed. That is what is most striking — Depp is as self-deprecating as he is utterly charming. 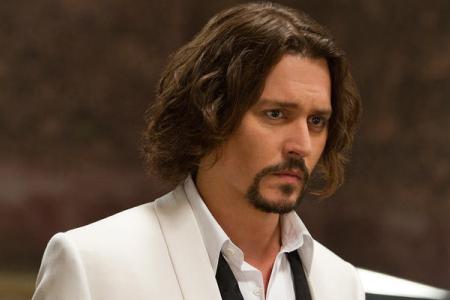 Depp’s role in The Tourist wasn’t supposed to be one with comic overtones, but that is what Johnny Depp brings. He is hilariously funny and spontaneous in his humor, and The Tourist director Florian Henckel von Donnersmarck encouraged his lead to add his trademark wit to the terse and tense scenes of the thriller, The Tourist.

Johnny Depp is The Tourist

SheKnows: How was it to finally work with Angelina Jolie?

Johnny Depp: She’s deeply committed to the work, has a great approach and is very smart. She’s a real treat to get into the ring with. She’s a lot of fun and funny! She also has a very, very absurd and perverse sense of humor. We met, oddly, right before we did this, which was just weird because we have a lot of mutual friends, acquaintances and people we’ve worked with. When we sat down together, it was kind of instant, we got each other. Within minutes we were yakking about our kids, the perils of parenthood and all that fun stuff.

SheKnows: In The Tourist, between Venice and Paris, there are some beautiful locations. Did you ever get to be a tourist while shooting? 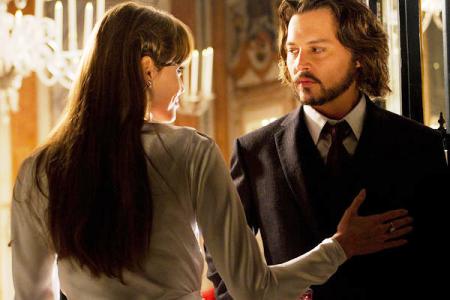 Johnny Depp: My tourist times were between the hours of 10 p.m. and 2 a.m. That was the only time that I could really wander and have a look around, because there’s virtually no one on the streets at that point. Everywhere you look is kind of a visual poem. I was amazed — these wonderful facades, clotheslines with people’s laundry and little signs on churches “bread for the poor.” It’s a beautiful, magical place. That’s the Venice I like to see as opposed to going into the gondola and putting a flower in my teeth. I like the nighttime Venice, the quiet Venice, when it feels like the ghosts are around.

SheKnows: What appealed to you about The Tourist?

Johnny Depp: The story, the script and the character dictate where you’re going to go. I imagined someone I may have known in the past that reminds me of a character. [The Tourist’s] Frank has this heavily groomed beard which I, by the way, can’t grow — it was all glued on. It’s a perfectly landscaped beard, which came from a guy I knew years ago and I was always fascinated with, because it looked like something in a jar. I couldn’t believe someone could actually treat [a beard] so pristinely.

SheKnows: Were the stunts in The Tourist a challenge, or are you more someone who enjoys the adrenaline rush of it all?

Johnny Depp: All that stuff — doing the stunts, being yanked down a Venice canal in a boat, being handcuffed to the railing — was way secondary to the immense fear that I had of going into “the drink.” The stunt guys who did have to go into [the canal] were on serious antibiotics like weeks beforehand. I remember being cuffed to that railing and getting ready to take off and saying to myself, “You’re going in, you’re going into this water.” Luckily, I didn’t, but it was pretty close a couple of times.

SheKnows: What about the pajamas you wore as you ran across Venice rooftops, did you have any say into those? They looked good on you!

Johnny Depp: [Laughs] I wanted footie pajamas with little bunny ears, but [the director] wouldn’t go for it. Initially he was supposed to be either in a towel or his underpants, but there was something about a grown man in pajamas that you’d pull out of Leave It to Beaver’s dad’s drawer. The imagery, juxtaposed with the background of Venice, I just thought there was something really funny about it.

SheKnows: I talked to your director Florian, and he said you had a knack for adding to the written lines, particularly with humor… 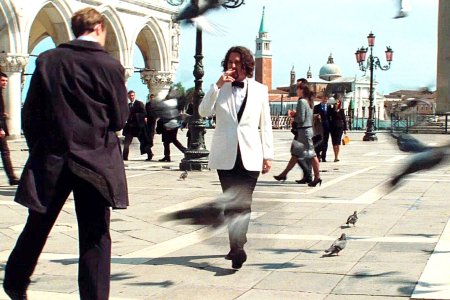 Johnny Depp: I always ask, “Is there something I can add to make it interesting?” It’s probably a bad habit. I remember doing Platoon back in 1986 with Oliver Stone. I was rewriting my dialogue, which is probably why he mostly cut me out of the film. I suppose Cry Baby was the first character I felt good about. You spend 90 percent of the time when you’re working trying to make your costar laugh, and I guess some of it’s in the film. With Edward Scissorhands, nobody really knew what I was going to do, even Tim [Burton], bless him, was a little nervous initially with my take on it, but it all worked out. I guess it probably comes from being locked into television for years and the parameters were so rigid, there was no room for movement. There was no room to grow so I swore to myself after that I wouldn’t do that again. If I had to go back to construction, that’s OK, I was pretty good at that. Pumping gas, I can do that too.

SheKnows: Here we are in Paris, your adoptive home. What do you like so much about Paris?

Johnny Depp: Everything. The literary history in Paris has been and always will be a fascination for me. The books that were written here, art history, paintings, painters who wandered these streets, great poets — it’s just always been magical for me and I’ve always oddly felt more at home here than anywhere else in the world. I suppose just to be surrounded by all this art, and all this incredible work that people have done over the years. You can feel, it’s still there, you still feel all those real writers. It’s very inspiring.

SheKnows: Do you think of yourself as a movie star who can choose whatever projects you want?

Johnny Depp: I never think of myself on those terms as a “huge global movie star,” so I can’t help but smile because it just doesn’t register as me. It still feels like I’m doing the same bits, just trying something different each time, exploring something new. It’s important to keep challenging myself and try to come up with some new face every now and again. Many years ago, Marlon Brando asked me, “How many films do you do per year, kid?” I said, “I dunno, maybe three.” He said, “Too much. We only have so many faces in our pockets.” And I went, “You know, that’s really true. But I feel like I still got a few faces left.”

SheKnows: Are you and Angelina Jolie the new Audrey Hepburn-Spencer Tracy combo?

Johnny Depp: Boy, I certainly would like to think so. I hope so, if she’ll have me again, I’d be more than happy. She’s a good girl. I have a lot of respect for her. In the face of all that she, Brad and the kids have to deal with, being globally under the microscope every second of the day, she’s grounded. She’s as cool, normal and low key as you’d want to meet. She doesn’t take it all that seriously. She is a wonderful mommy, a great mommy, which you’ve gotta take your hat off to as well. And she’s out there trying to do things in the world, to help. She’s impressive. She’s a force.