Paul Bettany is relaxing in his suite at the Le Meurice Paris hotel, sipping on some tea as we enter the room to chat about The Tourist. Although Bettany was born in the UK, it is easy to see how he too could feel like a tourist on the European continent — as he has lived full-time in New York City with his wife Jennifer Connelly and their children for years now.

Bettany met Connelly on the set of the Oscar-winning A Beautiful Mind. That film is simply one of the more than dozen films Bettany has made that have been honored with accolades and audience appreciation. Besides A Beautiful Mind, Bettany also starred with Russell Crowe once again in Master and Commander. In many ways, his character in Master and Commander shared beliefs with a real-life historical figure that Bettany brought to the big screen as a passion project — Creation. The film is the story of Charles Darwin that he made with his wife, Connelly. 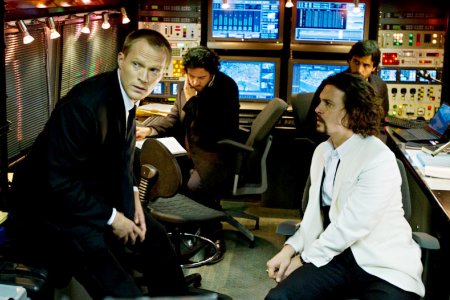 Now, Bettany is busy making The Priest, but on this day, he is in Paris, enjoying the sights and talking The Tourist with Angelina Jolie and Johnny Depp, a film he is clearly proud to be a part of.

SheKnows: What first drew you to acting? I know you are classically trained, but what was it about the field that made you want to make a life out of it?

Paul Bettany: Hollywood movies, cowboy movies, Charlie Chaplin movies, Buster Keaton movies, just thinking about being a kid. Sundays were always a struggle between my Dad trying to get me to go outside and saying things like, “You’re missing the best part of the day.” There’s me sitting in front of the TV, totally absorbed in a John Wayne movie or whatever. Movies. Movies. Movies.

SheKnows: What first drew you to The Tourist?

Paul Bettany: Well, I had seen Lives of Others, which is of course, a masterpiece. I got this call that Florian [director Henckel von Donnersmarck] wanted to meet me. I couldn’t figure out why this German director was a big fan of me. It turned out he was a huge fan of a movie I made called A Knight’s Tale. I’m still convinced that whoever the guy who dubs me in German is bloody fantastic [laughs]. So, we sat down and this was years ago, he said, “I take a long time to decide what I’m going to do next, but when I do decide, would you be in a movie that I made?” I said, “Absolutely maestro.” It was very simple.

SheKnows: Is it that way sometimes, that it’s not so much the material as it is the filmmaker?

Paul Bettany: Usually I’m very script based, but it’s the same thing as The Tourist when Peter Weir was making Master and Commander. I didn’t know the Patrick O’Brian novels. I knew Peter Weir is a hero of mine. He could have been making Free Willy 6 [laughs] and I would have said, “Yes, I would love to make Free Willy 6 with Peter.” It would have been the greatest of all the Free Willy movies. He’s never missed.

SheKnows: Any news on any future Master and Commander movies? There are, like you said, all those Patrick O’Brian books. 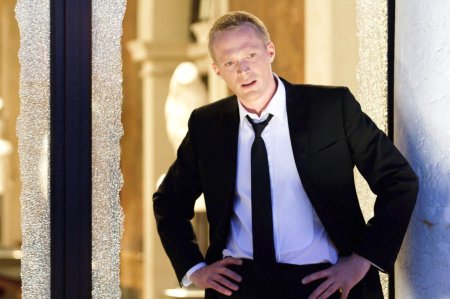 Paul Bettany: There has been discussion about it. Of course, I would love to do it. But, it’s an expensive film to make.

SheKnows: What was it like playing a Scotland Yard inspector? Growing up in England, were the police held in high regard, or in another light?

Paul Bettany: It would entirely depend on who you spoke to. I grew up in England in the 1970s, which were quite troubled times for England. The police had a reputation for roughness, to the point where there was a great TV series called The Sweeney — which was about the real-life Flying Squad. It was a very gritty, honest portrayal of what types of tactics the Flying Squad would use. They were brutal. I think that this [The Tourist] has much more to do with the fantasy notion of what Scotland Yard is like. I wear some beautiful suits in this movie and I’m not sure most Scotland Yard employees can afford those sorts of suits. But, it has to do with Florian’s vision for this, which is sort of a retro, glamorous look. It has a Cary Grant kind of feel to it as well.

SheKnows: I’ve heard many compare The Tourist to North by Northwest, with Cary Grant.

SheKnows: Where did your passion for Charles Darwin come from? You clearly have a strong feeling about the man since making Creation.

Paul Bettany: I guess school is where it began. Whether you believe it or not, I think you can still accept that it is perhaps the greatest thought than any human being has stumbled across. It’s so like seeing another dimension. What’s interesting about him is he’s such a social conservative with a revolutionary idea that it made him sick. His thought changed the world. For me, he was a kind and gentle human being who was unprepared for stardom and notoriety. I’ve found that really compelling — this gentle man who hid himself away in Kent and changed the whole world.