Vampires and werewolves clashed over a full moon this week on an all-new episode of The Vampire Diaries, By the Light of the Moon.

The Vampire Diaries gave us one last episode to sink our teeth into before it returns on January 27 — By the Light of the Moon. The vampires of Mystic Falls sharpened their fangs this week as they prepared themselves for a full moon and werewolves running amok. Not to mention, Elena (Nina Dobrev) was off making deals with Elijah while Stefan (Paul Wesley) and Katherine (also Nina Dobrev) were locked in the tomb.

As Tyler (Michael Trevino) began to prepare for his first werewolf transformation, he desperately looked to find Mason for help. Caroline (Candice Accola) tried to detour Tyler by helping him set up his chains and locks for the full moon, but she has bigger problems. Mason’s friend Jules shows up, alerting the Lockwoods that Mason never made it back to Florida — he’s officially declared missing. 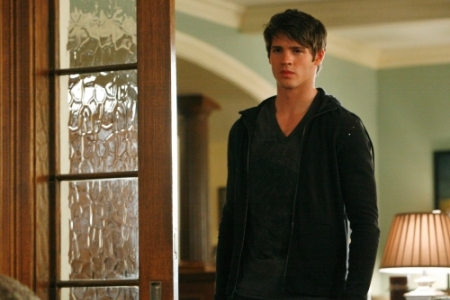 Bonnie (Katerina Graham) begins to work against the clock to remove the bind holding the curse to the moonstone despite Elena’s objections. The only way to keep Elena out of trouble and from getting herself killed is to put a trapping curse on her, which Damon (Ian Somerhalder) and Bonnie instigate. The Bennett witch looks to find more help from the one person who holds more secrets than she will ever know — Luca.

Meanwhile, Damon conveniently forgets to fill Stefan in on the fact that Elijah is back from the dead — if that can even happen. That’s okay though, Stefan has enough to worry about with the mind tricks Katherine has begun to play. Damon also meets up with Alaric (Matt Davis) to find out more about Jules.

Elijah then arrives to make a deal with Elena.

Trapped in the house, Elena has no choice but to listen to Elijah as Damon plays the sympathetic ear to Jules. She blabs about being in town to find Mason — jackpot, Damon! He tries to get her to drink a glass of Wolvaine but she catches on to him. Looks like there’s another werewolf in town and according to her, “It’s not the night to pick a fight.” Do we really think Damon Salvatore is going to listen?

Tyler begins to feel the effects of the approaching full moon as he tries to diminish his strength by drinking Wolvaine. Caroline can’t bear to watch the pain he’s going through so he begs her to leave — she won’t. As he increasingly grows stronger, she may want to think twice about the teeth that could kill her. Run, Caroline, run!

Elijah spins a tale to Elena that involves keeping her safe because he does not want the spell broken. He wants to offer Elena a deal — do nothing and draw Klaus out with Elijah’s help so he can kill Klaus. Elijah suggests they protect everyone they love together. She has her own request that you’ll find out about soon enough.

Bonnie shows Luca the moonstone in hopes that they can break the bind holding the curse in the moonstone. Bonnie thinks they’ve done it, but Luca was just putting on an act, pretending they broke it.

Rose returns to see Damon and is bitten by Jules — turns out the bite isn’t fatal after all. Katherine admits to Stefan that she still loves him but she won’t stop protecting herself. She does offer one piece of advice for finding Klaus — start with Isobel. Elijah shows up to release Stefan based on an agreement he made with Elena, but Kat isn’t going anywhere.

Caroline returns to comfort Tyler after the hardest part of the transformation is over while Stefan and Elena reunite. Damon and Rose come to an understanding — she’ll help him with all things Elena while they continue to be friends with benefits. Just as she’s getting it on with her “friend” they notice the werewolf bite is actually spreading across Rose’s back. Maybe it really is fatal to vampires.

What did you think of By the Light of the Moon? Will Rose survive the werewolf bite? Will Caroline and Tyler enter into an unnatural love? Find out when The Vampire Diaries returns January 27.