Celine Dion has introduced the world to her baby boys, Eddy and Nelson. Celine and the twins grace the cover of Canada’s Hello magazine and also welcomed People into their Jupiter Island, Florida mansion for a behind the scenes look at their life. 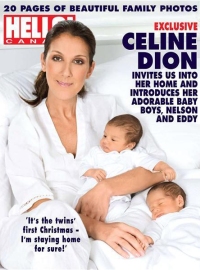 Celine Dion’s battle to get pregnant again has been no secret. Getting pregnant the first time wasn’t easy and she felt lucky to have her son, Rene-Charles, nine, but ultimately, Dion decided to fight the fight again. That led to an IVF marathon and a very public heartbreak when she announced she was pregnant back in August 2009 and then miscarried.

Dion’s struggles paid off, however. Dion and her hubby-manager Rene Angelil welcomed fraternal twin boys on October 23. Like many twins, the boys came prematurely and had to spend a few extra days in neonatal intensive care, but six weeks later, the Dion clan is showing off their new additions.

“The love and what I feel inside, what we have accomplished — I don’t know how to put it into words,” Dion told People. “It’s bigger than life itself.”

Dion and Angelil also had a bit of trouble coming up with names for their boys, but finally named the twins for their heroes, Eddy Mornay, the producer Dion teamed up with for her first five albums, and activist Nelson Mandela.

“They are very different,” Dion told Hello. “Eddy is my smallest, very delicate and needs to be cuddled a lot. And Nelson is darker and very loud, in a good way. He’s my bear, my big boy!”

Dion opens up to the magazines about life with her new boys and how little Rene-Charles is handling the responsibility of having two little brothers. She says she’s looking forward to a quiet Christmas at home and a few months of quality mommy time before she gets back to work and starts preparing for her Las Vegas show, opening March 15.

read on for more celine dion