With The Chronicles of Narnia: The Voyage of the Dawn Treader hitting theaters, and Christmas just around the corner, stars Georgie Henley (Lucy), Will Poulter (Eustace) and Santa Claus turned out for the lighting of the Ice Palace at the Beverly Center in Los Angeles. SheKnows was there to bask in the Narnia glow!

The Voyage of the Dawn Treader stars Georgie Henley and Will Poulter took the stage recently for the big Ice Palace lighting and the duo had a bit of help with their task. A slew of young assistants at the Beverly Center were armed with magic LED wands, as were the fans watching via live satellite from 15 other Taubman shopping centers to ready the crowd for one of the most anticipated movies of the holiday season. 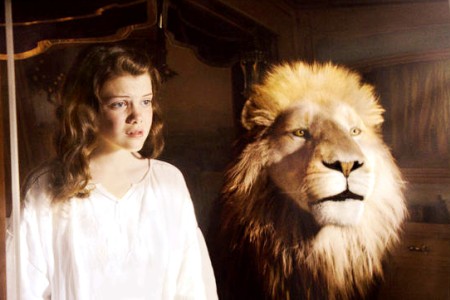 “The atmosphere is amazing,” Georgie Henley raved. “All the kids are here and it’s so exciting. There’s tons of people here who are so passionate about the films and the Ice Palace is amazing, and the best thing about it is it’s free!”

Fifteen Taubman centers have a multi-sensory 30-foot Ice Palace, which is quite a sight — and not just from the outside!

“It’s a little piece of Narnia,” Will Poulter said. “It’s got a snow dome with a light show, snow falling from the ceiling and never before seen trailers. There’s also a grotto around the back for Santa Claus.”

There’s also an Ice Palace throne that’s cool to the touch, life-like figures portraying scenes from the film and an interactive ice arch where fans of any age can leave their handprint next to paw prints left by famed Narnian creatures.

Inside The Chronicles of Narnia: The Voyage of the Dawn Treader

The Chronicles of Narnia: The Voyage of the Dawn Treader hits theaters in 2D, RealD 3D and Digital 3D on December 10 and finds Lucy and Edmund stranded in Cambridge, but not for long.

“They’re stuck with their horrible cousin Eustace and in the middle of an argument, they get sucked into a painting and into Narnia on Prince Caspian’s ship,” Henley previewed. “People are in for a whirlwind. You’ve got tons of action, tons of comedy and a return to the magic of The Lion, the Witch and the Wardrobe.”

The young stars haven’t yet gotten to see The Voyage of the Dawn Treader in 3-D, but the 2-D premiere in London wowed them.

“It’s definitely a spectacle,” Poulter promised. “I loved it. Visually, it’s awesome and it’s a real adventure film. The books are so iconic and are a part of people’s upbringing and so the films have become, as well. Kids relate to Georgie, because over the course of the films, people have watched Georgie, Skandar (Keynes, Edmund), Will (Moseley, Peter) and Anna (Popplewell, Susan) grow up. That’s cool.”

As a matter of fact, SheKnows was quite taken by how Henley has grown. She was an adorable eight-year-old when she started in the Narnia series as Lucy and now she’s a tall 15!

“I love the idea of playing Lucy as a teenager,” Henley shared. “It’s good for people to see her grow and see how she deals with the issues they are dealing with themselves. A lot of teenagers face the problems that Lucy faces, so I was happy to play that and also make Lucy more of a role model.”

The Voyage of the Dawn Treader video interview

The Voyage of the Dawn Treader Santa song!

Narnia fans can get a sneak peek of the action at the Ice Palace exhibits, which will be up through December 24 at the following locations:

The Shops at Willow Bend (Plano)