Donna D’Errico and Khloe Kardashian are two celebs speaking out about the controversial new TCA procedures. Baywatch alum D’Errico claims she was screened for being hot, while Khloe is under fire after comparing her recent pat-down to rape. 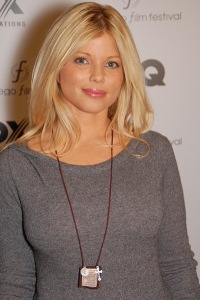 Donna D’Errico, who starred in Baywatch from 1996 to 1998 and was a 1995 Playboy Playmate of the Month, is up in arms after an LAX Transportation Security Administration screener pulled her aside, along with her son, Rhyan, 17.

When the 42-year-old looker asked why she was being singled out from the holiday crush of travelers, the agent simply said, “Because you caught my eye, and they didn’t.”

“I’m not sure whether they had recognized me or not,” Donna D’Errico told AOL News. “If they did, they didn’t say anything. However, it is my personal belief that they pulled me aside because they thought I was attractive. My boyfriend (Roy J. Bank)…looks much more like a terrorist than either I or my son do, and he went through security with no problems.”

According to D’Errico, she was not given the choice between the full-body scan and a pat-down search, or even informed that she was stepping into one of the new, controversial “naked” scanners. Her frustration escalated to outrage when she saw the TSA agent who pulled her out of line snickering with his coworkers.

“It isn’t right to hide behind the veil of security and safety in order to take advantage of women, or even men for that matter, so that you can see them naked,” she concluded. “It’s a misuse of power and authority, and as much a personal violation as a Peeping Tom. [The] TSA decides for you that you will consent to being scanned or felt up, or you simply won’t be allowed your constitutional right to travel from one place to another freely.”

TSA spokesman Nico Melendez put little stock in D’Errico’s complaint, telling AOL, “If you see the images, you’ll know it’s not a naked picture. The passengers are selected at random and not because they’re celebrities.”

While D’Errico maintains she would have opted for the pat-down, Khloe Kardashian took her grievance over that practice to George Lopez Tonight.

In the Monday, December 6 episode of his late night talk show, George Lopez asked Khloe Kardashian about her experiences with the new TSA screening process and the frequent flyer had quite a bit to say.

“Well, they basically are just raping you in public,” Khloe Kardashian said. “They asked the other day, ‘Do you want to go for a screening or get patted down?’ I was like, ‘I’ll get patted down. I don’t want that X-Ray to see everything, honey!'”

Kardashian added, “But the people are so aggressive! It’s like, chill out. You didn’t find anything on me yet, calm down. [The female TSA agent said], ‘Okay, I’m going to be patting you down and I’m going to be touching’ they say, ‘the crease of your [expletive]!’ That is so inappropriate and they are so aggressive and forceful. I was lowering my arms and she threw them back up and said, ‘Don’t move, or I’m going to be forced to get tough!’ And I said, ‘You’re gonna get tough? Jeez!'”

Though many seem to agree the TSA procedures are going too far, Kardashian is now under fire for her use of the term “rape.” Just as when Twilight star Kristen Stewart cried fame rape earlier this year, victims’ advocates are up in arms over Kardashian’s apparent lack of sensitivity to the topic.

The crew at SheKnows has done our fair share of traveling, since we’re always in search of the hottest news, sets and movie junkets, but we haven’t had any trouble with the new TSA procedures. Not a scan or a pat-down to report on — yet.

Have you had any offensive or upsetting experiences? If so, leave a comment and tell us about it.